Blockbuster: Awesome, I don't need to lift a finger... 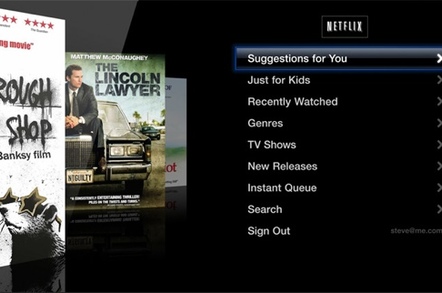 Analysis Netflix has been hit by a patent infringement lawsuit by Open TV, now a subsidiary of Nagra, the Switzerland-based conditional access company, part of the Kudelski Group. It has not said what the patents are, but the filings at the US District Court for the District of Delaware show that they are all software patents.

There are seven patents in total and they relate to placing internet information on a TV screen, online media delivery, using presentation syntax to offer interactivity, the creation of user profiles and systems of TV playout.

These are all common functions of any over the top video delivery, and this looks like Nagra is saying that the interactivity built into Open TV is generic and everyone must pay it royalties.

Given that these are all software patents, and mostly just ideas, not relating to specifics, we suspect they are completely without merit once a court has taken a deeper look and that many of the patents will not stand scrutiny. Netflix uses standard technologies, including those from Microsoft, to deliver its services, and if it is guilty, then everyone is.

It cannot escape anyone that Nagra is a close partner of Dish Network in the US, which is itself now the owner of Blockbuster, which was driven to bankruptcy and into the arms of Dish, by Netflix. This is a nuisance suit devised by Dish to give Blockbuster a chance. There is no other reason why these claims are being aimed at Netflix rather than a hundred other TV Everywhere services, which use many of the same concepts. And if the relationship with Dish wasn’t enough of a reason, OpenTV already has 80 customers including Time Warner Cable, Comcast, Dish Network, Charter, NBC Universal and Sud- denlink Communications, all worried about Netflix. .

OpenTV claims that it has been negotiating with Netflix for a year for access to its patent portfolio. The lawsuit seeks unspecified monetary damages, which it wants increased due to willful infringement, and a permanent injunction barring Netflix from using the patents. They haven’t said it yet, but closure of the service in the US is sure to come up in some future filing.

After a recent meeting between Netflix and OpenTV lawyers in September, Netflix stopped responding to OpenTV threats, which led to the legal action. Some naysayers will be bound to use this to attack the Netflix share price, but we suspect that legal discovery will make short work of this case.