Wikipedia doesn't need your money - so why does it keep pestering you?

'Excuse me, just a second. Excuse me. Yes you, sir. Excuse me' 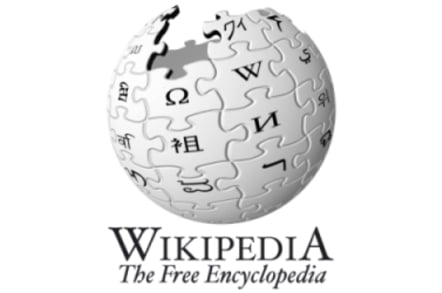 Special Report It's that time of year again. As the Christmas lights go up, Wikipedia's donation drive kicks off. Wikipedia claims that the donations are needed to keep the site online. Guilt-tripped journalists including Heather Brooke and Toby Young have contributed to Wikipedia in the belief that donations help fund operating costs. Students, who are already heavily in debt, are urged to donate in case Wikipedia "disappears".

But what Wikipedia doesn't tell us is that it is awash with cash - and raises far more money each year than it needs to keep operating.

Donations are funding a huge expansion in professional administrative staff and "research projects". Amazingly, this year for the first time Wikipedia - the web encyclopaedia anyone can edit - has even found the cash to fund a lobbyist.

All this has been met with dismay by the loyal enthusiasts who do all the hard work of keeping the project afloat by editing and contributing words - and who still aren't paid. For the first time, Wikipedians are beginning to examine the cash awards - and are making some interesting discoveries.

First, let's have a look at the finances.

The original intention, according to the site's co-founder Jimmy Wales, was to fund Wikipedia through advertising revenue. "If Wikipedia were to become wildly successful, in terms of web traffic, then it would be easy to introduce just enough (and hopefully non-intrusive) advertising to continue to cover expenses," Wales wrote in 2001.

In 2006 Wales rejected that option and pointed to other revenue sources - "leveraging our brand into radio, television, games, etc" - but left the door to advertising open just in case it was needed.

The vast potential for advertising attracted the interest of venture capital firms. Soon after, VC firm Elevation Partners (whose investors include Bono from U2) to court Wikipedia, a very curious relationship we covered in depth in 2008. Elevation made substantial donations - including one totalling $1.2m - to Wikipedia.

Later Wales dropped the volunteers and hired professionals instead. It's not hard to see why: as Wales had acknowledged, Wikipedia is one of the best-known brands in the world. But the courtship with the VC firm never blossomed into a formal relationship.

Today, the funding is organised by a non-profit corporation, the Wikimedia Foundation (WMF), and the growth in funding has been dramatic. In 2006, the foundation had just three employees, and operated on a budget of $3m. It was amateurish, too. In 2007 evaluators at Charity Navigator gave WMF just one star (out a possible five) for efficiency (a fact deleted from WMF's Wikipedia page). The Wikimedia Foundation hired a convicted felon as its chief operating officer to look after its books while on she was on parole. The executive's convictions included cheque fraud and unlawfully wounding her boyfriend with a gunshot to the chest.

Today the foundation is a very different beast. It's cash-rich - with a headcount of 119, 53 per cent higher than 2010/11 - and raised almost $35m in the last donations appeal. The architect of the latest highly aggressive funding drive is Sue Gardner, executive director of the WMF.

Described by one insider as "very savvy politically and excessively diplomatic", Gardner has been lauded as one of the 100 Most Powerful Women by Forbes. Gardner, who takes home at least $196,000 annually, has also improved the online encyclopaedia's professionalism: Charity Navigator now gives it four stars. 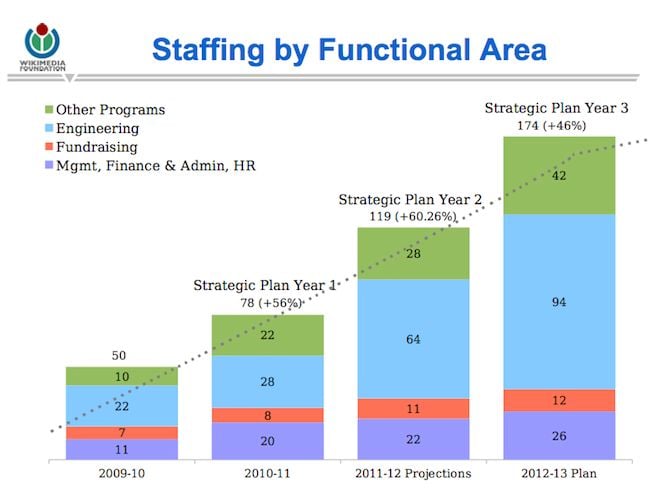 Growth Strategy: in 2006, the WMF had just three staff. Then the chugging started

Wikipedia is now awash with cash

Only a small fraction of this is required to keep the site alive. No matter how many edits enthusiasts make, they don't get a penny for their hard work. So where's the cash going?

Primarily, it's being spent on new research and development programmes. These are outlined in the Wikimedia Foundation's Strategic Plan - and the next year's installment is outlined in detail here. [PDF, 850kb]

Some projects appear to be eminently sensible. For example, the number of editors has been in decline since 2007, and the gender ratio is heavily tipped towards men. The foundation wants to make participation easier, so much so that one major project is the development of a visual editing kit, so contributors do not need to learn the arcane technical Wiki syntax. This is running behind schedule - rollout was supposed to be a year ago, but it will be mid-2013 before it's ready, according to the project page.

But some of the spending has raised eyebrows. In the UK, the local chapter of WMF, Wikimedia Foundation UK, admitted to racking up a bill of £1,335 on business cards, calling it "a failure to make the most effective procurement choices". The UK foundation also found itself under close scrutiny after approving projects that personally benefited board members - which imperilled the foundation's hard-won charity status.

Guilt-tripping is a powerful fundraising weapon

Some other funding is highly questionable. Wikimedia Germany approved a €18,000 allocation called "Festivalsommer 2013" to send Wikimedians to pop concerts in Germany as "accredited photographers". Nice work if you can get it. The budget includes travel to and from the gigs for the budding snappers.

A larger allocation of €81,000 will go to Wikimedians to photograph politicians. A grant of €81,720 will pay a researcher to study... editing. It's all a stark contrast to the unpaid volunteer ethos.

Earlier this year Wikipedia attracted criticism for its new-found enthusiasm for political campaigning - not a traditional activity for encyclopedias, where fairness and objectivity is part of the "brand". The substantial contributions from Google leave the foundation open to the charge that it's lobbying for the agenda of large corporations by proxy.

On Wikipedia's own donations page we learn of a moving story of a student in Agnam-Goly, a Sahelian village in north-eastern Senegal with a population of 3,143 inhabitants, who expresses how he'd love to give money to the foundation.

"I wish I had money to donate to Wikipedia," writes Adama Diop.

Does he know wealthy Westerners are using the donations to buy cameras and travel to pop concerts? Or that the foundation has more cash than it knows what to do with?

Wikipedia's aggressive annual fundraising drives have been phenomenally successful, transforming the organisation and creating a powerful new political lobbying force. Few politicians or media figures now dare criticise Wikipedia, where derogatory material can appear overnight and remain unchanged for years. But the organisation does seem to be presenting an incomplete picture. ®