Last of stores to close tomorrow 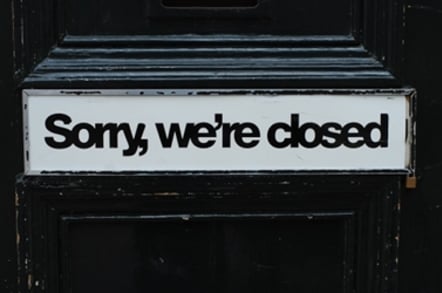 The last stores of the once mighty High Street giant Comet are to close by tomorrow but the saga looks set to continue, with taxpayers potentially having to step in to cover redundancy costs.

Administrative receiver Deloitte, called in by the ailing retailer's parent Hailey Acquisitions Ltd on 2 November, had been holding talks with south-coast property tycoon Clive Coombes about picking up a big batch of stores.

Deloitte last month set the deadline to find a buyer for Comet's real estate and it posted a banner on the retailer's website this weekend stating "last weekend … all stores closed by 18 December".

It is understood that 14 stores closed on Saturday, 15 were shuttered yesterday, a single outlet is due to close today and the lights will be turned off in the remaining 49 tomorrow.

So far just a few retail rivals including Dixons have expressed an interest in Comet.

A mouthpiece at Dixons told The Channel that the high street retailer had already competed with Comet in a number of locations and there was "little need" to pick up more than "four to five outlets" but said no details were available.

He also confirmed Dixons had taken on 1,000 Comet workers for Christmas and 200 from white good repairs and installation on a permanent basis.

But the end of Comet has had a sting in the tail for more than just the workers at the business, with taxpayers being forced to cough for the mistakes of the owners.

A report from Deloitte is today expected to reveal that Comet posted losses of £95m in the year to April 2012 and another £30m in the months before administration, suggests The Guardian.

Over £80m worth of Comet assets have been divided between preferential creditors and Hailey Acquisitions - owned by OpCapita, which bought Comet for £2 in November 2011 - is expected to pocket £50m of the £145m they are owed.

As administrator, Deloitte is also considered a preferential creditor.

Around 85 per cent of suppliers have used retention of title to claim about £40m worth of stock from Comet that had not been paid for.

But unsecured creditors will gain nothing from the proceeds of administration. These include punters that paid for goods not yet delivered, landlords and HMRC.

Hard-pressed taxpayers are facing an unsettled bill of £26.2m in VAT and payroll taxes and the government has agreed to stump up £24m in redundancy pay.

When Deloitte moved into Comet, the retail giant employed 6,611 workers of which 4,682 were full timers, many of whom have been faced with the prospect of joining the dole queue before Santa arrives.

The fate of Comet's website still hangs in the balance, with Appliance Online tabling the seven-figure bid that the administrators at Deloitte were pushing for. ®