Behold ATLAS, the fastest computer of 50 years ago 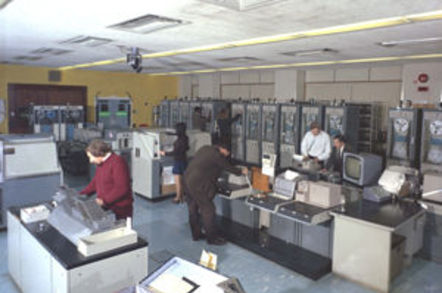 Think today's computing industry moves fast? Try that of decades past. Moore's Law predicts that processor power will double every couple of years or so, but on December 7, 1962, the scientific computing power of the entire UK is said to have doubled in a single day.

That was the day they switched on the original Ferranti Atlas, the UK's first supercomputer – and for a time one of the fastest machines in the world – which celebrates its 50th birthday on Friday.

Over at Google's Europe Blog, the Chocolate Factory has put together an essay and a short video about the Atlas to commemorate the event, including interviews with some of the men involved with building and maintaining the colossal number-cruncher.

Just those basic tasks were no mean feats, given the technology of the time. Although the Atlas used transistors, rather than the valves – vacuum tubes, in US lingo – found in earlier computers, it still needed to be hand-assembled from countless components.

As former Atlas maintenance engineer John Crowther explains in the video, assembling the second Atlas at the University of London took six months.

"When we had finished commissioning, we eventually got to a point where the machine would run for ten minutes without fail, and at that point we all cheered and went to the pub to celebrate surviving ten minutes," Crowther explains.

Keeping the thing running wasn't easy, either. The factory used to manufacture Atlas was originally used to build railway engines, and as a result the components would arrive thickly coated with soot. Crowther estimates that around a third of the system faults his team handled were due to dirt.

Still, it was worth it. The Atlas delivered nearly a hundred-fold advance in processing power over previous computers and it brought many innovations, including virtual memory and a multitasking operating system. With Atlas, calculations that used to take hours would take minutes.

Naturally, that kind of advance didn't come cheap. Each of the three Atlas machines that were eventually built sold for around £2.5m, or about £50m in today's currency. Processor time was billed at around £750-800 per hour – and that's in 1962 pounds sterling.

Ah, but it was a short-lived era. The last Atlas was decommissioned in 1976, just 14 years after the first was put into service, as newer models made them obsolete.

After all, as Crowther points out in Google's video, "People thought only one Atlas would be needed, ever. And now, your washing machine has a more powerful computer in it than Atlas did." ®