Asylum requests denied by Guatemala, US 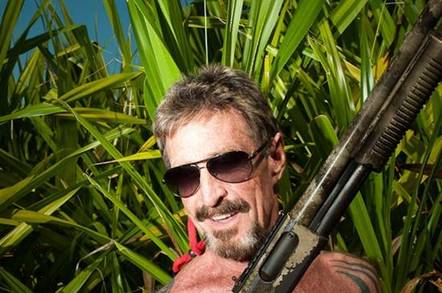 Updated Eccentric tech millionaire and fugitive John McAfee was rushed to a hospital in Guatemala on Thursday after suffering what his lawyer says were two mild heart attacks.

At the time, McAfee was in the custody of Guatemala's Special Police Task Force, which had detained him for questioning after he entered the country illegally from neighboring Belize.

On Thursday afternoon, an assistant to McAfee's attorney found the former antivirus mogul lying on the floor of an immigration service cottage, Reuters reports. When he proved unable to speak or move, he was taken to a police hospital.

Previously, McAfee had seemed in good spirits since entering Guatemala, a move he claims was necessary to escape the persecution of the Belizian government and police. McAfee is wanted for questioning as a "person of interest" in the murder of a neighbor of his Belize residence, Gregory Faull.

Belizian police first linked McAfee to the murder in November, and he has been on the lam ever since, leading authorities on a bizarre and highly publicized goose chase – never mind that police have denied he is a suspect in the case.

Not surprisingly, his love of publicity seems to have been his undoing. McAfee was arrested by Guatemalan officials on Wednesday after his location was outed by an unnamed hacker, who deduced it from the metadata embedded in a photo published by the online magazine Vice.

Detainment seemed not to have dampened McAfee's spirits at first. He was given access to a computer and blogged that Guatemala's jails were much nicer than those in Belize. Even the coffee was "excellent," he said.

But McAfee's prospects weren't looking bright. Determined not to return to Belize for fear of mistreatment at the hands of the government, McAfee initially said that he would seek asylum in Guatemala. On Thursday, Guatemala's foreign minister told Reuters that McAfee's request had been rejected.

Later, McAfee blogged that he had spoken to the American embassy in Guatemala about possibly returning to the US. That, too, was apparently a no-go.

Finally, on Thursday afternoon an "urgent" message appeared on McAfee's blog, asking supporters to email the president of Guatemala and "beg him to allow the court system to proceed, to determine my status in Guatemala, and please support the political asylum that I am asking for."

Officials have released no further information as to the state of McAfee's health, but he is apparently taking the situation in stride. When nurses tried to remove his jacket after wheeling him into a hospital room on a gurney, he reportedly said, "Please, not in front of the press." ®

McAfee has since told the Associated Press that while he had suffered chest pains, he did not believe he had experienced a heart attack. A doctor who examined him at the police-run hospital agreed, but said that McAfee "appeared to be suffering from high stress."