Revealed: The gift that keeps on giving to Oracle ... is dying

How the deep well of enterprise licence cash will dry up 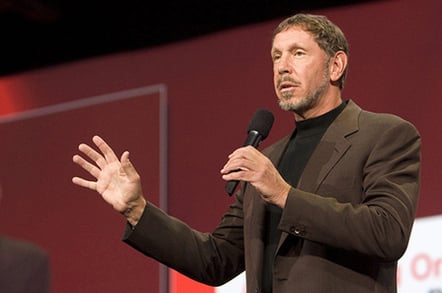 Open ... and Shut Even as traditional enterprise IT vendors come under pressure from modern cloud and open-source applications, these old-school businesses have one strategy that is the gift that keeps on giving: Enterprise licence agreements.

Not only do ELAs help to shield vendors from pricing pressure from open-source alternatives, they also increase friction for those anxious to swap out ageing applications and infrastructure for better alternatives. But how long can ELAs block customers from embracing the future of IT?

According to research done by Cowen and Company, and reported by Senior Research Analyst Peter Goldmacher, legacy vendors such as SAP and Oracle have bought themselves some time with their ELAs. But not much. As Goldmacher writes, "while these ELAs are in place, changing the application or support provider for a single product will not reduce the cost of the maintenance portion of the contract thus mitigating a customer’s incentive to part ways with their existing vendor".

The problem is that ELAs, and the expensive maintenance they institutionalise, are not forever.

Cowen and Company surveyed 85 senior IT executives, then filtered down the list to 45 managers at companies with revenue over $500m and IT budgets in excess of $50m. In other words, these companies spend a lot of money with legacy IT vendors.

Intriguingly, just about 85 per cent are exploring ways to get out of these relationships, either by looking to alternative cloud-based applications like Workday or Salesforce.com or to third-party maintenance providers:

As reported before, SAP has been doling out 50 per cent discounts to keep customers in its profitable maintenance fold. At some point, the discounts won't be rich enough, nor the returns to the vendor great enough, for this kind of price gouging to be able to continue. It's already the case that new licence revenue can't keep pace with legacy vendors' cost of sale, making hugely profitable maintenance streams so critical to the health of the businesses of these legacy vendors.

Once maintenance dries up, these companies will struggle.

That is, unless they can embrace new business models, which is far easier said than done. The entire cost structure of an Oracle or IBM is predicated on a big, expensive CIO sale. That sort of cost structure doesn't go away overnight.

Meanwhile, cloud and open source vendors are built on lower cost, more sustainable revenue models that require much lower upfront fees and instead depend upon longer-term subscriptions. In the case of these models, there is absolutely friction involved in switching vendors, but it's a different kind. For an open source CRM company, for example, an enterprise can switch to an alternative provider at any time, but is unlikely to do so, given all the data that accumulates in the open source system.

Data, therefore, and not maintenance contracts, is the new lock-in.

Actually, it's always been this way. The difference is that the legacy proprietary software model was a two-phase lock-in, built on both data lock-in (which is a natural consequence of committing to a single system and can't easily be overcome) and contractual lock-in. SaaS and open source eliminate the second component of this lock-in, but nothing can fix the first part.

Time to short Oracle and its ilk? No. There's still plenty of lock-in left in those ELAs. But time is running out on the proprietary vendors' lock-in of yesterday. ®