It's all in the EULA fine print 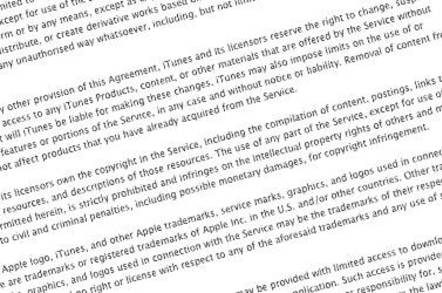 Feature I'm not a very good liar, I haven't got the memory for it, which is why it always pricks my conscience whenever I tick the yes box to the prompt "I have read and understood…" when installing software. I am, of course, fibbing. I never read a word. In fact, even though we all tick yes to these agreements every day, unless you're a legal bod, I doubt you could find anyone you know who could quote a single line from any of them.

Since the beginning of the year, I've been collecting licence agreements for all the software I've installed. The idea was to see just how many words I was being asked to read. It seemed like a good idea at the time, but as the pile for me to read grew, so, in inverse proportion, did my will to live. I could lie at this point and say I read them all, but instead, I opted for a few well-worn favourites.

Adobe Flash anyone? In recent years, the company has claimed it had eight million downloads a day and, before we get on to the maths, have you ever followed that link that took you a second to ignore as you ticked the "I have read and agree…" box? 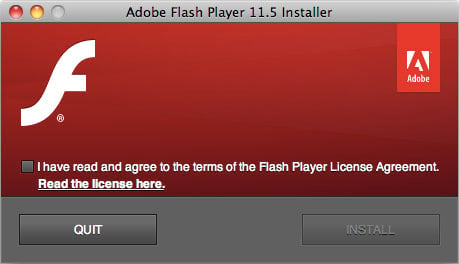 You read it, right?

Follow the click and you'll be on your way to 3500-word licence agreement that appears in about 50 languages that you’ll have to scroll through to find your native tongue. I don't know about you, but ten minutes or so later, I could certainly tick yes to having read it. But had I understood it? You know what? I think these companies don't mind if we lie at this point. And that irks me somewhat. Why don't they just have a box that says, “Whatever, dude” or “I have read and understood… You're kidding, right?”

Yet the tickbox convenience provided serves to reinforce the user attitude that, I'll never read or understand any of this… can we just get on with it now?

So eight million people a day lie to Adobe. Or put it another way, 8 million honest people who all took at least ten minutes to read this licence agreement and, oh lordy, understood it, would, in terms of total time, eat up over 1,522 years in just one day. If we put that into man-hours: an 8hr day, 240 working days in a year, that becomes 6944 years in a day. Turn that into a 50-year working life and that's 138 lifetimes a day… How about a year of Adobe Flash downloads with the licence agreement being read each time… that's 50,694 working lifetimes per annum… Equivalent to populations of Macclesfield or Staines.

And if we go back to how many years of reading a ten-minute licence agreement takes for this quantity of users, we’re on to over 2.5 million years. Wind the clock back that far and we’re in a time when mammoths roamed a globe dominated by glaciers. Given Adobe's claims to these download volumes, reading that licence agreement demands quite a lot time from mankind.

Now if I can return to the soapbox for a moment, the issue is really one of collusion. A software vendor doesn't imagine for a moment that anyone will read its Ts&Cs. And, obligingly, we never do. Yet we blindly click “I agree and understand…” every day. It just seems wrong. And it's not so much the deliberate ignorance we choose in the name of expediency, but why do they bother?

OK, so there are legal caveats to be flagged up, but if we ignore them, how can this be said to work to inform us of our responsibilities? There must be a more succinct approach that doesn't turn every Flash, iTunes, or Firefox user into a habitual liar. 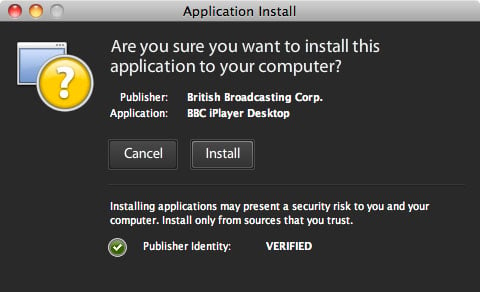 I was rather taken with the BBC’s desktop iPlayer message of just a one-line warning about security issues. It seemed so simple and user friendly, and then moments later the Adobe Air instal box appeared and the pain started all over again. Interestingly, the iPlayer desktop app has its own terms of use link on the main UI page, the installation doesn’t insist that you read them. Perhaps the assumption is you’ll use the product responsibly and if you have any doubts, just click.

It’s perfectly reasonable approach and no doubt amounts to more of a contractual obligation than someone buying a gun at Wal-Mart is asked to agree to. I’ve never bought a gun nor a new car, but if you had thrust into your hand a 3000-word agreement to abide by before you stepped into a brand new Mercedes, acknowledging that...

In no event will the company, its suppliers, or certification authorities be liable to you for any damages, claims or costs whatsoever including any consequential, indirect, incidental damages, or any lost profits or lost savings, even if a company representative has been advised of the possibility of such loss, damages, or claims. Blah, blah, blah...

...it might rather spoil that purchase feelgood factor. That’s why it’s so convenient to have those software ‘read it’ tickboxes. Also, car drivers do have insurance for any unpleasantness. Maybe if computer users had insurance too, we could skip those licence agreements? On second thoughts, scrap that – have you read the small print on your car insurance lately? Another factor is you will most likely own the car or the gun, rather than have them on licence.

I have to say I find Apple’s take on things rather interesting. The Mac OS X Mountain Lion software updater, declares use of the update is subject to the original SLA and rather than bore you with it, you can just move on and click instal. There is a link shown too, but it rather abandons the ‘read it first’ approach. You might find the SLA appearing when you run the updated app, but it seems a bit late in the day. The new iTunes 11 does this and then invites you to agree to share info with Apple, which involves yet another layer of seemingly innocuous text to ponder. 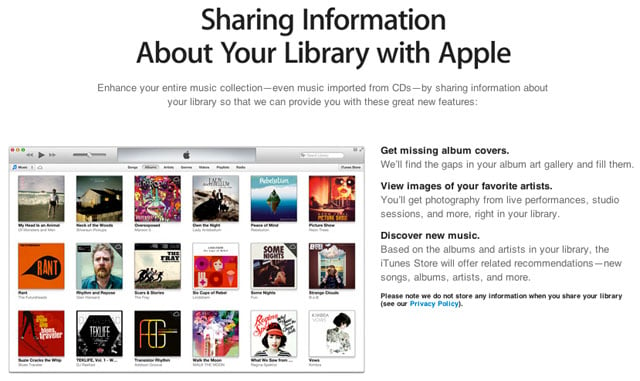 Peeling the onion with iTunes 11: 'Learn More' on sharing goes to this page where there's another link for the Privacy Policy page

During the year I recall encountering some installations that don't even allow scrolling the whole SLA before proceeding. There's just the 'I have read and agree' tickbox alongside a 'Save for later' option. This, let's just get on with it, approach has its appeal, but it also suggests the agreement isn't to be taken seriously, as it doesn’t matter if we lie about having read any of it. All very strange considering this documentation remains important enough for massive companies to draft out, have checked by lawyers, present in some form or another and insist on imposing on users.

Next page: Just what are we agreeing to?
Page:
Tips and corrections
122 Comments