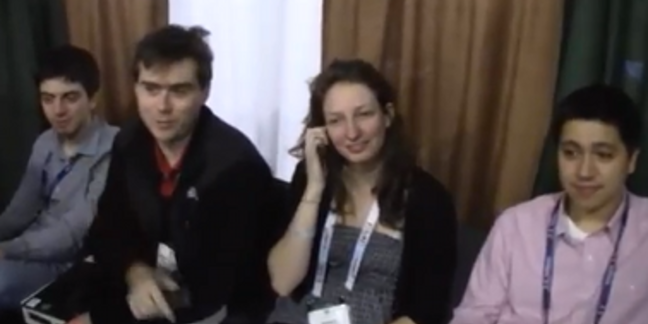 SC12 Early on the last day of the SC12 Student Cluster Competition, I hit a couple of morning meetings and then went wandering around the competition area. Most of the teams had at least two or three reps in the booths monitoring the systems and just sort of hanging around. They had turned in their final scientific results the night before, so all that was left to do was wait for the results and then tear down their systems in preparation for the trip back home.

Team Chowdah (aka Team Boston, aka Team Mass Green) had a single team member in their booth. Fortunately, it was one of the identical twins, meaning that when you take into account creepy twin parallelism, the booth was really being manned by 1.5 or maybe 1.8 team members. (I’m not sure how well they scale, particularly when separated by distance. Team advisor Dan said that they had run some tests, but he didn’t have the data with him.)

My first thought was that Team Chowdah had hit all of the vendor parties and, in typical Boston style, ended up in drunken fights, or getting arrested, or both. I was assured that even though the team did hit several (many) of the vendor parties, cooler heads prevailed and everyone had a lot of safe and sane fun. We talked about the competition, future ideas for systems, and how we can crank up the pressure on competitors. My idea? Put each team on a large pallet and suspend it from the rafters at the beginning of the competition. As each team completes tasks, its platform is gradually lowered until it reaches the floor. Maybe it could be a new “Thunderdome Division” of the SCC? ®