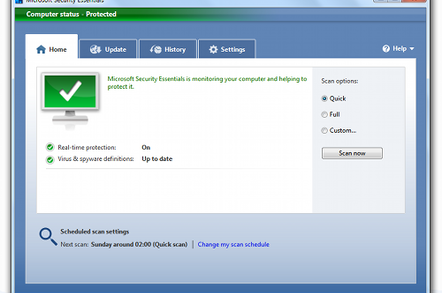 Microsoft Security Essentials, Redmond’s free antivirus tool for home users and business with up to ten PCs, can detect just 64 per cent of zero-day threats when running under Windows 7.

That low detection rate has cost it the AV-TEST Institute’s seal of approval, a certification it hands out to products that meet 11 of 18 criteria it assess. Those criteria consider how effective software is at detecting and blocking threats, repair of infected systems and overall usability including “average slowing down of the computer when the software is used on a daily basis, false positives during a system scan and the display of false warnings or the blocking of certain actions during the installation and during the use of known good software.”

During October the Institute rated Security Essentials 4.0 and 4.1 at just 1.5 out of 6 in terms of its ability to protect a PC, thanks largely to the 64 per cent zero-day detection rate being well below the industry average 89 per cent.

Security Essentials has lost AV-TEST’s seal before, with its September 2010 test failing to meet the lab’s criteria. It is the only one of 24 AV products for Windows 7 without the certification. Four products missed out for Windows Vista and two for Windows XP. Windows 8 AV tools are yet to go under the microscope and Microsoft is absent from AV-TEST's list of vendors thanks to the new OS' integrated protection software.

While tests like these have no official standing, a look at AV-TEST’s longitudinal analysis of Security Essentials show it has consistently struggled to perform well in its malware detection and blocking tests.

Another security software testing organisation, Virus Bulletin, says Security Essentials’ performance is sufficient to justify its VB100 rating, which can only be attained by software that “prove[s] it can detect 100% of malware samples listed as 'In the Wild' by the WildList Organization” without generating any false positives. ®

Tavis Ormandy to Microsoft: Have another Windows Defender vuln

Microsoft to Tavis: Here's the fix. Any chance we could have a day off?