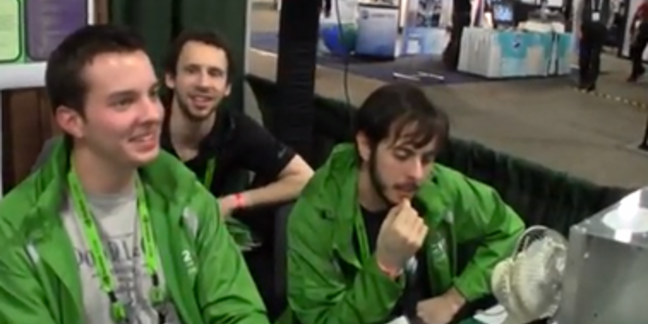 SC12 Video It was the last day of last week’s SC12 Student Cluster Competition, and Pennsylvania university students Team Slippery Rock chatted to us during the LittleFe battle. In this competition track, teams of university students (plus a high school team) pushed their six-node LittleFe mini-iron to the limit, attempting to find the best solution to a 10,000-city Travelling Salesman* problem.

It’s clear in the video that the Slippery Rock students aren’t exactly thrilled with being interrupted on the final day of the fight. But halfway through the two-minute video, one of the team members figures I’ll go away quicker if he tells me something, so he discusses some of the challenges they faced in the competition and how they handled them.

Banter aside, Team Slippery Rock did a great job in the competition. They didn’t win it all, but they turned in the best interview with the judges, meaning they did the best job at explaining the problem and their approach to ferreting out a solution. ®

* A computationally complex problem: Given a list of cities and their pairwise distances, the task is for the salesman to travel the shortest possible route, visiting each city only one time and then returning to the origin city. Much, much harder than it sounds.

Microsoft decrees that all high-school IT teachers were wrong: Double spaces now flagged as typos in Word