Installing Vista SP2 is like dousing a burning turd 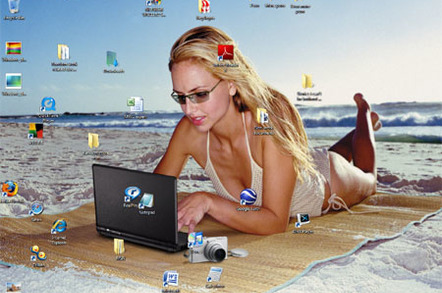 "But I installed Service Pack 2!" our user whines at the PFY.

"Installing SP2 on Windows Vista is like putting out a burning turd. Best possible outcome, you've got a steaming turd!" the PFY snaps.

"I've got 3 gigs of memory," he sniffles

"Adding memory to Vista is like adding paper to a blocked toilet. Best possible outcome: you've still got a turd. Albeit disguised a little."

"Is everything I do going to be compared with faeces?"

"That's generally the case - and not just when we're talking about your computer," I add.

"But I need to do some work at home!"

"If you wanted to do work you shouldn't have chosen Vista."

"Not from me," I respond. "And none of those toolbars were installed here either. A toolbar on a browser is..."

"I do work on it!" the user responds defensively.

IF I HAD FIVE QUID FOR EVERY TIME A USER BRINGS THEIR BLOODY HOME MACHINE IN TO GET FIXED BECAUSE "It's running slow" I WOULD HAVE QUITE A LOT OF SPARE CASH LAYING AROUND!

"Yeah, we can't really help you with that." I say

"But you fixed it last time!"

IF I HAD TEN QUID FOR EVERY TIME A USER BROUGHT THEIR CRAPPY BLOODY HOME MACHINE INTO WORK FOR ME TO UNINSTALL:

"Yes well we don't do it anymore - it's a health and safety thing," the PFY says.

"Health and safety... what does that mean?" our user snaps.

"Say we accidentally installed a new browser on your desktop when we install any piece of software which has prostituted itself to a browser company and added a checkbox to the install procedure to install a new browser by default. Say we did that and you used the browser to view something that got your heart racing - like an attractive camel. You might have a heart attack and blame us. So we can't really take that risk."

"What about," I chip in, "if we tidied up your machine - made it as good as we possibly could - which isn't all that good considering you have Vista..."

"Oh, does that make a difference?"

"Only to the size of the hammer," the PFY responds.

"Nothing," I say. "Anyway, say we tidied up your Vista BUSINESS machine and ran like the wind - which, let's face it, is never going to happen. But say there was a miracle and somehow it happened. And you took your machine home and let your kids play on it again. And they installed all their peer-to-peer apps which started every time the system did, along with some some cracked games riddled with bots and every time you connected via the VPN our firewall started going bananas. And we'd look into it and find out it was you. And we'd tell you about it and you'd tell us that you'd been meaning to come in because your machine is running slow again."

"Say you did all that and then you had a workplace accident which bore all the hallmarks of you having been beaten repeatedly with what might have been an ITIL manual - still in its plastic wrapper (because who reads that crap anyway) - but in actual fact was caused by you slipping when you went to get a page out of the printer. Say all that happened. Would you blame it on us for fixing your machine?"

"Oh, well in that case leave it here and I'll take a look at it."

"Uh, thank you for looking at my machine. It seems to run a lot faster now."

"Although we removed some piece of software that you really need and so you got your kids to install it, but then it ran slow again and so you brought it back into work and plugged it in to our network to see if it's faster here?" I ask, looking the firewall messages streaming by on my monitor...

"It was only a registry scanning tool!"

"Adding a registry scanning tool to Vista is a lot like adding a turd to the top drawer of your desk."

"Are you saying that registry scanners are bad?"

"No, I'm saying there's a turd in the top drawer of your desk. And I'd be careful taking paper out of printers from now on. Particularly if it's in a darkened stairwell..."