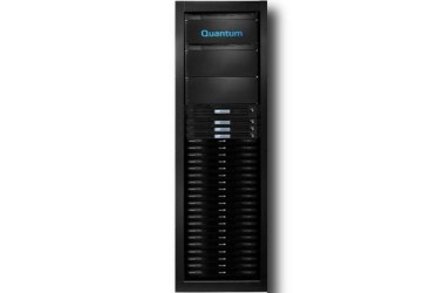 Quantum sees object storage as a the Big Data gap filler between overly expensive dual-controller RAID disk arrays and laggardly but cheap capacity tape archive vaults. Its Lattus products use Amplidata technology and will arrive independently this year and integrated in StorNext in 2013.

As the amount of data to be stored with disk array access speed grows and grows, disk arrays become increasingly unsuitable. Meanwhile, tape archive vaults - while being cost-effective - suffer from retrieval latency. Disk arrays at scale are costly and RAID rebuild times grow as disks become larger. As the number of spindles in an array rises, we need protection against two disk failures, one while a first failed disk is being rebuilt, which RAID 6 provides.

At the rate things are going, we'll need protection against a third disk failure whilst two failed disks are being rebuilt, and the time to get back to a fully functioning array will be measured in weeks. The amount of additional disk needed for parity data will grow and the storage efficiency of the array, the ratio of user data to meta data, will worsen. That's untenable.

Object storage, using erasure coding schemes, gets over that, by spreading objects across many spindles and nodes and only rebuilding failed objects on a crashed disk instead of the whole disk. Basically the disk content reconstruction task is spread across many nodes and takes less time. The object storage system is said to be self-healing, but then, so is a RAID array, albeit slower at the healing job.

Quantum sees object storage as a third storage type complementing traditional disk and tape - not replacing either but doing better than both where tape-class capacity and disk access speeds are needed. It also sees it as being inherently capable of having wide distances between nodes or groups of nodes, and is calling it Wide Area Storage (WAS), saying it provides geographic distance coverage without the burden of replication schemes.

A Lattus system, printed LATTUS by Quantum, has a scale-out architecture based on three hardware components:

According to Gabriel Chaher, Quantum's marketing VP for EMEA and APAC, this is much cheaper than a traditional dual-controller RAID array at the same capacity levels.

There will be two Lattus systems introduced by Quantum:

A future plan is to provide a cloud aspect to Lattus, either with Lattus nodes existing in Quantum's own Q Cloud service or in some other service provider's cloud.

StorNext provides a filesystem storage resource pool using disk for fast access and tape for more affordable high capacity storage. Users in markets such as rich media and the US government sector get fast access to streaming video media and other file assets. A limitation of StorNext currently is that reliable and SLA-assured fast access to media assets on tape is not possible, yet storing petabytes of such asses on disk is costly.

Lattus-M bridges this gap. Data will be transferable between StorNext tape and Lattus because StorNext uses its own self-describing format to write data to tape and read from it, and not a backup format. Thus object storage can be a mid-tier of storage in StorNext, residing between the existing dual-controller RAID arrays on the one hand, and Quantum's Scalar tape libraries on the other.

This is the first time, El Reg believes, that an object storage supplier has twinned object storage and tape, with tape used for long-term storage of low-access rate objects - the inactive portion of an archive. Amplidata itself sees little role for tape, but then it has object storage to sell - it's the start-up way.

Lattus will store data with ten 'nines' of availability; that is, there will be a 99.99999999 per cent level of data availability. Chaher says its scalability is effectively limitless, meaning no limits have been found yet and tens, even hundreds of petabytes of WAS capacity are feasible. It also performs well, with Chaher saying StorNext delivers 90 per cent of the raw storage architecture's speed.

StorNext is a niche product, albeit one with 70,000 plus licences sold, and Quantum must be hoping that the inclusion of a Lattus-M tier and the offering of Lattus-X outside StorNext will provide Big Data niche products that are really big. It will be competing against Caringo, CleverSafe, Dell with its Caringo object technology, EMC with Centera and Atmos, HDS with its object technology, NetApp with its StorageGRID, Scality and whatever HP produces.

There are some players outside the object world. Which way will IBM jump? Will it add an object store behind GPFS? And how about Oracle - will we see ExaObjects?

Lattus-X should be available in December and the list price for a 500TB Lattus-X base system is expected to begin at $675,000.

Object storage looks to be emerging as the escape route from the RAID trap facing existing dual-controller RAID arrays. Existing applications will access it using a file interface but newer applications could use the REST interface and move away from NFS and CIFS/SMB. We can add another growth product and market to Quantum's roster and, with Quantum itself, look forward to its revenues and profits growing as its tape revenue decline flattens out and the newer products' sales increase grow... Lattus so pray. ®