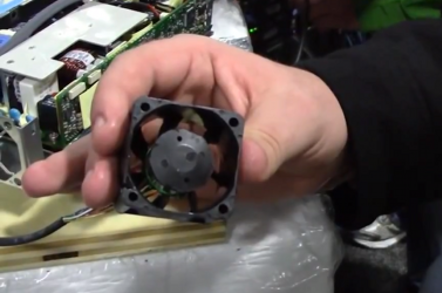 SC12 Meet the 2012 edition of the Texas Longhorn Student Cluster Competition team. This video was shot right after they received the scientific application data sets and had begun their initial processing.

We discuss how they parcel up the work in their cluster and how they now have tools that give them a much better idea of what they can (and can’t) accomplish with their hardware. We also talk about why they didn’t bring the immersive cooling (aka server deep fryer) gear that they sported last year.

Finally, we find that even though they said goodbye to their mineral oil cooled cluster a little more than a year ago, their hands remain soft and silky smooth.

The Texas Tech Red Raiders came to the SC12 Student Cluster Competition with a truly impressive plan. They engineered and built a completely unique immersive cooling solution that looks to be incredibly efficient and, well, incredibly cheap. They took inexpensive and commonly available components, built an enclosure, and combined it all into a homegrown server deep fryer that shows a lot of promise.

In the video, they walk us through their configuration, which included a marine bilge pump, an automobile transmission fluid radiator, and computer case fans. Unfortunately, we won’t see the true promise of this system. While the team made it to Salt Lake City without any problem, their hardware didn’t – the system they were going to use in Salt Lake never made it into the US. But all isn’t lost. In true Student Cluster Competition tradition, other teams (U of Texas and Purdue) gave the Texas Tech some spare servers while vendor partners Dell and Mellanox scoured the show floor to get even more gear to the Red Raider team. So they’ll still be able to compete, but we won’t see anything close to the numbers that their planned system should have delivered.

You can find more coverage of the student cluster competition as well as SC12 supercomputer news right here.

Analysis Get the data out of memory faster