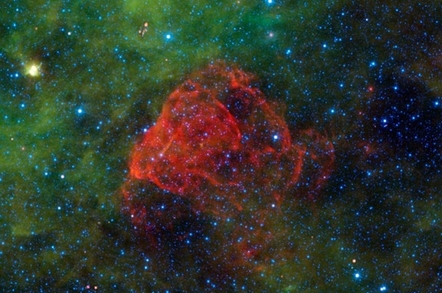 Scientists have found the remnants of two supernovae that appear to have occurred in the universe’s infancy, shedding new light (pardon the pun) on reality’s formative years and the origins of matter.

The discoveries, reported in Nature, are significant because, as the paper revealing them states, they offer “a way of investigating the deaths of the first generation of stars to form after the Big Bang.”

While the new supernovae discoveries are not of that generation, they’re made of the stuff created by the first stars’ demise. First-generation stars are thought to be responsible for the creation of many elements that did not come into being at the time of the Big Bang, so understanding their origins offers insights into the young universe’s evolution.

Jeff Cooke of Australia’s Swinburne University of Technology, one of the discoverers of the supernovae and a co-author the paper, told Australian newspaper The Age it was possible to detect the supernovae thanks to the stars’ immense size, which meant that when the nova neared, "the whole star collapses in on itself. It's one giant thermonuclear bomb, and it's incredibly bright."

Buoyed by this find, astronomers now hope to spot more and older supernovae, as it is now felt colossal suns and the novae that resulted were more common than previously thought in the early universe. Spotting remnants of the first stars is also now on the astronomical agenda.

The supernovae were discovered with the 3.6-meter Canada—France-–Hawaii telescope between 2003 and 2008. The 10-meter Keck I ‘scope was used for finer analysis. ®