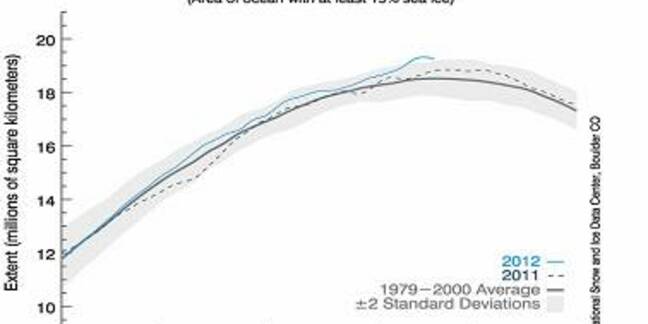 Boffins from NASA and the British Antarctic Survey have teamed up to investigate one of the great mysteries of climate science: why it is that the extent of sea ice around the south pole has actually increased steadily over the years.

As the scientists note in their new paper, while the increase is not as big as the decreases seen in Arctic sea ice, current climate models - the ones which predict dangerous levels of global warming this century if carbon emissions aren't drastically reined in - say it shouldn't be happening. This causes people to suspect that the models might be wrong, or as Paul Holland of the BAS and Ron Kwok of NASA put it, the Antarctic ice spread has the effect of "limiting confidence in [the models'] predictions".

Thus it is that the two men have looked into the matter, in particular by probing the movement of sea ice around the coasts of Antarctica using satellite recordings.

"Sea ice is constantly on the move," explains Holland. "Around Antarctica the ice is blown away from the continent by strong northward winds. Since 1992 this ice drift has changed. In some areas the export of ice away from Antarctica has doubled, while in others it has decreased significantly."

"The Antarctic sea ice cover interacts with the global climate system very differently than that of the Arctic," adds Kwok in understated style. There was much coverage this summer of the record low ice area in the Arctic, but meanwhile another record for most ice was set atop the seas around the austral continent.

Holland and Kwok reckon their new satellite research has at last shed some light on the mysterious (to climate science) ice gains around Antarctica, and this is reflected by the publication of their new paper in hefty climate journal Nature Geoscience.

So the mechanisms which have driven the creation of more ice down south are better understood. Unfortunately the climate models which forecast disaster for the future are as yet unchanged, so confidence in their predictions will have to remain limited. ®