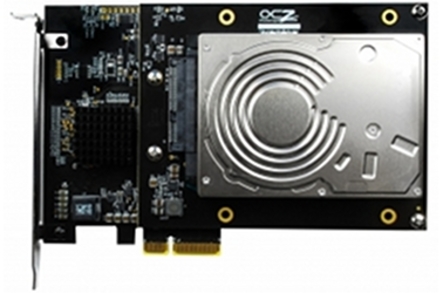 OCZ, the flash storage start-up that over-extended itself by pumping out new SSDs before securing a reliable flash NAND chip supplier, has had excess products - and 198 staffers - dumped by incoming CEO Ralph Schmitt.

Founder and CEO Ryan Petersen resigned back in September,

Schmitt was appointed in October to clean up OCZ's act. He's cutting fast and quite deep, pink-slipping staff close to 200 staff and trying to separate the wheat from the chaff on the consumer SSD products front.

Some 150 products variations will be canned, cutting out 80 per cent of what OCZ calls its value products, with the current focus being on mainstream and high-end consumer products, plus enterprise and OEM products. We may see fewer Agility, Vertex, Octane, Petrol, RevoDrive and what have you products.

It also appears as if OCZ will flog off excess inventory. Its statement reads: "The Company has … evaluated its inventory and is in the process of making the necessary adjustments, including monetising some inventory to better align its product offerings and to free-up cash for the business."

Total headcount is being cut by 28 per cent, with 32 per cent going at the OCZ Taiwan production plant, which includes some contractors. At the end of February this year OCZ employed 708 people full-time, some 450 of them outside the USA. A 28 per cent cut implies 198 people are getting pink slips; ouch.

These sackings and product retirements should cut costs substantially, with a $20m a year number mentioned by Aaron Rakers, a Stifel Nicolaus analyst. Schmitt is no doubt hoping he's cutting fat rather than muscle from the OCZ body - cutting deep but not too deep.

OCZ still hasn't a date for filing its latest quarterly 10-Q report with the SEC, due to the difficulties of working out the costs of customer incentive schemes set up in the Petersen era. ®