Comet confesses: The receivers are among us even now

Dixons shareholders skip and clap their hands for joy 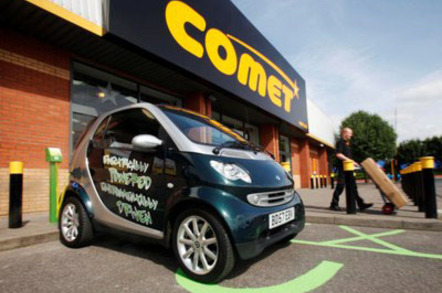 Comet has finally confirmed that administrative receivers will be landing on its door step early next week.

It is understood that Deloitte will review the options for the ailing retailer which include selling it as a going concern, scaling it back or liquidating it. A spinner at the chain told The Channel: "Comet Group Limited can confirm that it has today taken steps to seek the protection of the court with a view to the company entering into administration."

She said this would happen in the week commencing 5 November, but did not specify an exact date.

"In the meantime the board is urgently working with its advisers to seek a solution to secure a viable future for the company," the spokeswoman added.

Comet, which employs 7,000 staff across 240 stores, was flogged to venture capitalist OpCapita for £2 last November.

The equity player brought in ex-Dixons boss John Clare in January to rescue the biz, but the loss of trade credit insurance - a safety net for suppliers - meant he was facing an uphill battle.

It is understood that as potential buyers circled Comet last month, suppliers became even more wary of dealing with the retailer - and at a time when the biz was struggling to find the cash to pay for kit upfront to stock shelves for Christmas.

Comet and other retailers have suffered at the hands of web boutiques offering cheap deals, and vendors such as Apple building shimmering white stores that offer shoppers a 21st century shopping experience. Comet has been trading since 1933, which was when it was founded by George Hollingbery in Hull as Comet Battery Stores.

With potentially one less competitor in town, Dixons Retail's share price rallied 12.5 per cent this afternoon. ®