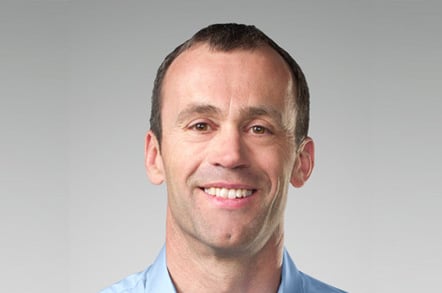 Comment John Browett must be pinching himself after his stint as Apple's retail veep came to an abrupt and unceremonious end this week, despite stellar numbers from his division of the firm.

Just seven months into the prestigious role, the Brit was shown the door for an unspecified reason at the same time as Scott Forstall, senior veep for iOS Software.

But the manner of their exits and the way their departures were announced couldn't be more different - Forstall found himself on the outside after refusing to apologise for the botched map app in iOS 6. He will remain at Apple CEO Tim Cook's side for the remainder of the year in an advisory capacity.

Forstall's exit was announced in the opening sentences of Apple's statement on the management shakeup. Browett's departure was quietly noted in the penultimate paragraph.

"Additionally, John Browett is leaving Apple. A search for a new head of retail is underway and in the interim, the retail team will report directly to Tim Cook," Apple stated.

Browett's appointment as Apple store chieftain certainly raised a few eyebrows, not least because his career trajectory was unusual: he was strategy director at low-cost UK supermarket Tesco and CEO at electronics chain Dixons before landing a top role at the world's most premium tech brand.

He had managed to steer Dixons through choppy waters: in 2008, credit insurers pulled their lines on the company, forcing suppliers to trade with the business without a safety net. Some feared for its future.

Under Browett's leadership, Dixons' UK operation turned a profit in the last fiscal year at a time when rival Best Buy had been forced to beat a costly retreat back to the US and Comet was given away to a venture capitalist along with a £50m dowry.

But more than that, sources inside Dixons claim Browett did something others had failed to do: he improved customer service by overhauling staff remuneration and shifted the focus away from pricing and promotions.

While no one sound of mind would place Dixons on a par with the touchy-feely shopping experience at Apple, or one of its premium partners such as John Lewis, it's generally accepted that Browett did a good job at the helm of his high-street chain.

Browett was CEO Tim Cook's first senior hire since succeeding the late Apple co-founder Steve Jobs, so his exit is more than a little embarrassing for Cook. The fruitchomp CEO gave his new recruit top billing back in January, ahead of his start date in April.

"Our retail stores are all about customer service, and John shares that commitment like no one else I've met," said Cook. I guess Cook doesn't shop at Dixons.

Dixons sells Apple kit, but that is where any similarity with Cupertino's boutiques ends: there are no glass staircases and minimalist draping of products over polished surfaces in Blighty's warehouse-like PC World or Currys mega-stores, and Dixons Group staff aren't prepared to hang around shooting the breeze with you as you scratch your chin and mull over making a purchase.

So what did Browett do to be axed with immediate effect?

The first rumblings of discontent were felt in the summer when sources close to Apple told The Channel that departing full-time staff were being replaced by part-timers, and short-term contracts were not being renewed.

Apple employees also showed the Wall Street Journal a letter Browett wrote to store managers in which he outlined a new "staffing formula", which cut some workers' hours and left shops understaffed. He reportedly admitted "we messed up", but insisted that no one was laid off and that Apple was seeking job applicants.

This dented Browett's reputation among the workforce and senior management. Apple doesn't air its dirty linen in public ever, and it is rightly protective of its brand. These sorts of leaks indicate significant internal strife.

So it is likely this was the failing for which he was cast out. He doesn't appear to have a job lined up and Apple doesn't yet have a successor.

The timing is interesting too: the decision must have been taken some time ago but conspiracy theorists reckon Apple pushed out the announcement while the New York Stock Exchange remained closed as Hurricane Sandy slammed into the east coast of America.

At the time of writing, Apple's stock had slipped by a couple of per cent below the $600 mark, but it could have taken a bigger hit had Browett and Forstall's departure been revealed when the market was open.

Didn't he do well? Too well, possibly

Operationally, the Brit could hardly be accused of dropping the ball. In Q3 2012, ended June, Apple retail stores grew 17 per cent year-on-year to $4.1bn.

Nine new shops were opened in the quarter, taking the tally to 372, but with an average of 367 open for business across the quarter, each one turned over $11.1m on average, up from $10.8m a year earlier. Segment margin in the quarter hit $868m, compared to $802m last year, and 84 million customers walked though the doors compared to 74 million in fiscal Q3 2011.

Again for Q4 2012, ended 29 September, there were no signs Browett was getting it wrong: turnover from retail stores was up 18 per cent year-on-year to $4.2bn.

During his reign stores broke the quarterly record for Mac sales, shifting more than 1.1 million units, and 18 new stores opened in 10 countries. With an average of 376 stores open for business, median revenue per store was $11.2m, up from $10.7m in the same quarter last year. Segment margin was $848m compared to $654m in 2011.

Some 94 million bods walked into the stores, up from 77.5 million a year ago.

Perhaps it was difficult for Browett to knock the Apple sales juggernaut off course in such a short time. But it is posible Cook feared that, in the long term, Browett didn't understand what makes the reassuringly expensive brand tick.

After all, Browett was used to an idea of customer service which would drive retail staff to at least attempt to offer customers the best value-for-money solution to fit their needs from a range of offerings. Certainly Dixons staff would prefer to sell something more expensive with a higher margin than something cheap - but Apple staff never offer anything but very expensive, very high margin products. They will always try to sell you Apple, even though for many (or even most) purchasers it probably isn't the most cost-effective buy.

From some viewpoints, then, Apple's vaunted commitment to the customer lacks a lot of credibility, no matter the lofty stance the company and its sales reps take.

It would seem that this culture clash may have been what led to Browett's ousting. The Brit leaves with $1.74m worth of shares, not bad for seven months of work, but well short of the circa $60m he was promised over a five-year period as part of his contract.

There is no doubt he'll find and deserve gainful employment elsewhere; there must be a queue of vendors lining up to find out if he escaped from Cupertino with any magic dust to share. ®