Used to be all (Microsoft green) fields round here 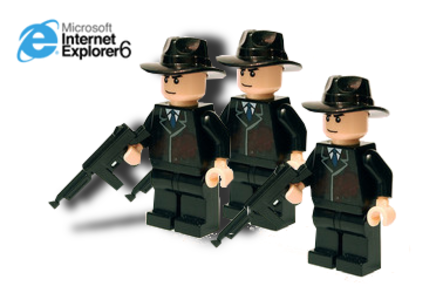 A browser start-up is building software to help large operations manage the increasing breakdown in dominance of Microsoft’s Internet Explorer and the proliferation of various other browsers in the workplace.

Internet Explorer hit squad Browsium has announced beta availability of Catalyst, software that manages the creeping penetration of Firefox and Chrome onto work PCs and devices.

Catalyst allows organisations to run Firefox and Chrome on enterprise machines - in addition to IE - without exposing important applications and machines to attack from the web, and without the additional cost of training and supporting end-users.

Catalyst works by directing the browser that the end user is running to the “right” application or website. The “right” app or site is defined in the Catalyst configuration manager; you set the default browser for a given type of traffic, with Catalyst executing the rules.

It comes as IE continues its slide south: from near-total market saturation in the 2000s, Microsoft's browser is now at 32 per cent share according to StatCounter, and is the number-two browser behind Chrome on 34 per cent. Firefox is on 22 per cent. Microsoft’s slide comes despite the much-hyped releases of IE8 and IE9 in recent years, to refresh the franchise.

Browsium president and chief operating officer Gary Schare told The Reg that Catalyst straddles the growing fragmentation. “Catalyst lets you view different sites and view them with different browsers, so you don’t have to have all sites work in one browser,” he said.

To get around this so far, Schare reckoned organisations have been putting in manual places to support mixed browser environments but that these end up costing time and money because they don’t work.

His company, formed by ex-Microsoft-Windows team members who'd built early versions of IE, has to-date been heavily engaged with major operations on managing IE6. One of his biggest customers in the UK is HM Revenue & Customs, shifting 85,000 PCs running Windows XP and IE6 to Windows 7 and IE8.

Through his engagements, Share said he has found organisations using training to get around the cross-platform issue: telling users the sites they can access on a browser-by-browser basis but, he says, this breaks down and people end up calling the support desk.

This happens because Firefox and Chrome don’t support Microsoft’s ActiveX controls, so sites optimised for Microsoft’s browser won’t render the same way in Firefox or Chrome – they will appear broken, and would need to be tweaked by IT.

In another scenario, organisations can get left open to attack: for example, companies are telling staff not to use IE6 for the web, but IE6 users do end up slipping online. IE6 continues to cling on inside many large government and business operations, which are tied to the browser through their use of Windows XP. But IE6 online poses a major security problem - with even Microsoft campaigning for users to move to IE8 and IE9 in order to stay safe from phishing and malware.

Google, too, has helped complicate things: Google in 2009 released a plug in for IE called Chrome Frame that gave IE the Chrome rendering and JavaScript engines. The idea was to display web content in Microsoft’s then-standards-challenged browser that had not been built for things like ActiveX controls.

Browsium in August here noted Chrome Frame poses a major security risk; it is invoked through a meta tag but there’s no way to lock it down to a specific site. That means there’s no way to prevent any site on the internet from invoking the application that the user wants to run in Chrome.

You can register for the Catalyst beta here. ®