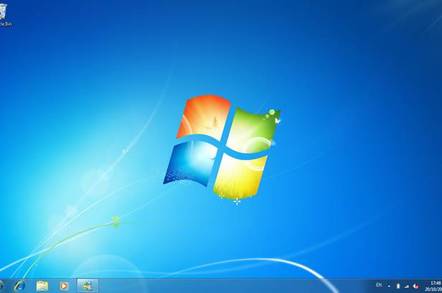 Exclusive Microsoft has set an aggressive target of 70 per cent of enterprise PCs running Windows 7 by the summer of 2013.

The Reg has learned from sources close to Microsoft that the goal set by Redmond HQ is for an additional 20 per cent of enterprise PCs to move to Windows 7 by the end of its current fiscal year – on 30 June 2013. That would build on the disputed 50 per cent of enterprise PCs that Microsoft claimed during the summer of this year that were on Windows 7.

It looks like the kinds of organisations Microsoft's field must target during 2013 will be those running some of the biggest and hardest application migration projects – the kinds Microsoft shied away from last year and which couldn't be included in the 50 per cent number.

And Microsoft's field must operate in an environment where Redmond's corporate attention is 100-per-cent focused on Windows 8 rather than Windows 7.

A source close to Microsoft's field told The Reg: "Microsoft doesn't have a coordinated worldwide effort to get Windows 7 deployed."

The Reg asked Microsoft if we could speak to somebody leading the 70 per cent charge, to discuss what strategy is planned and how last year's 50-per-cent stat was compiled. However, a Microsoft spokesperson said the company was not able to comment.

Whether Microsoft can hit the new 70 per cent target is questionable, because the baseline 50 per cent stat Reller gave is in dispute and is increasingly being discredited.

Browser-management startup Browsium questioned the 50 per cent stat at the time in a blog, and claimed Microsoft had included non-enterprise operations in its numbers. Browsium claimed at the time that Microsoft had thrown in small and medium businesses and education users, and those running apps that are "easy" to migrate.

Browsium said 80 per cent of big companies – banks, healthcare and insurance companies, and government organisations with 10,000 or more PCs – are still clinging to Windows XP, with just 20 per cent on Windows 7. The company called Microsoft's numbers "optimistic."

And Microsoft partners The Reg has spoken to are telling us that only now – three years after Windows 7 launched – are they experiencing a rush of work as customers jump off Windows XP.

BDNA this month told us it's working on five of the seven largest Windows migrations in the US with two customers on 450,000 and 250,000 PCs each, all running Windows XP. The projects are new, with the 250,000 migration, a financial institution, only two-and-a-half months into its life.

Desktop management specialist SmartDeploy told us of another major government customer with hundreds of thousands of PCs also only now going to Windows 7 from Windows XP.

Should Microsoft's field fail to hit the 70 per cent target, then it will be marked down under chief-operating-officer Kevin Turner's infamous red, amber and green traffic light system, so there's is a huge incentive for employees to push Windows 7 upgrades hard and fast.

There's also another incentive, and that's the date for the end-of-support date for Windows X: 8 April, 2014.

Organisations still using Windows XP after that April date will be left naked by Microsoft - they will no longer receive code updates or security fixes, with Microsoft so far holding out against extending the deadline. Instead, Microsoft can offer individual, paid support re-deploying engineers and dedicating them to the customer in question – but it comes at a price.

Extended support is a pain for Microsoft, because it diverts people from building new versions of Windows. It's a problem for customers, too, because it's expensive.

One Microsoft partner told us "there's no chance" large enterprise customers – those with 500,000 PCs or more – would migrate more than half of their PCs to Windows 7 by the April 2014 deadline.

"It's too hard, and the economy sucks and people aren't throw enough money at it," the partner said.

The difficult part is moving in-house apps and apps dependent on the Windows XP browsers, IE6 and IE7, to the browser in Windows 7. It's these kinds of customers that have not been included in the migrations that Reller was boasting about during the summer.

Aaron Suzuki, SmartDeploy chief executive, told us he reckoned customers that are big enough – those with hundreds of thousands of PCs – could eventually force Microsoft to support them if they are still on Windows XP after April 2014.

"People are seeming not that anxious to get off Windows XP," Suzuki told us. "Customers are content to run multiple generations of operating systems concurrently because of the application dependencies."

The Reg asked Microsoft what plans it is drawing up to support customers who miss the 8 April 2014 date, whether it would extend support and how much it would charge organisations.

A spokesperson instead referred us to Microsoft's support lifecycle policy FAQ here.

"Strategic Microsoft partners may also offer support beyond the Extended Support phase. Customers and partners can contact their account team or their local Microsoft representative for more information." ®