BridgeSTOR: They called us mad, but we've put deduped data on TAPE!

Are we crazy or what?! 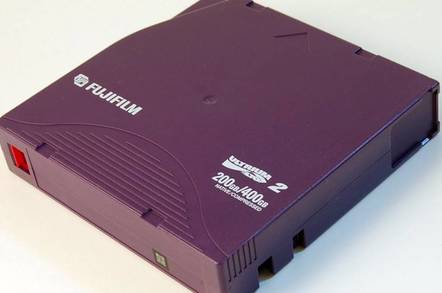 Tape Summit BridgeSTOR has announced it will store deduplicated data on tape, a medium considered totally unsuitable for deduplication by everybody else.

John Matze said his company's Data Deduplication File System (DDFS) works with the open Linear Tape File System (LTFS) so that deduped data on tape can be rehydrated and restored. Matze was, at one time, the chief technology officer for tape and disk data protection company Overland Storage.

A deduplication system typically involves an array of disk drives and a controller of some kind removing duplicated blocks of stored file data and replacing them with a reference to an index of master blocks, typically using some form of content hashing to decide whether each block is unique or not. Rehydration, the populating of the deduped files with the original blocks so they can be accessed by applications, requires the index of master blocks.

Because tape is a sequential medium and slower than disk to access data, it has not been viewed as a practical medium for storing deduped data since deduplication processes could take a long, long time.

CommVault has a deduplication to tape capability but not much has been heard about it.

Precisely how DDFS combines with LTFS to make deduping tape a practical proposition will be revealed on Tuesday, 30 October, when Matze discusses the technology at a Tape Summit in Frankfurt, Germany, at the SNW Powering the Cloud event.

The cost-per-GB of storing such data would be comparatively trivial and opens the door to literally vast tape archives with an enormous density of data, far far outstripping any other archival technology - if DDFS works. For example, a tape library with, say, 10,000 LTO-6 cartridges, could hold 10 x 10,000 x 3.2TB equalling 320,000TB or 312.5PB. This is a quite a prospect and the technology will be examined closely to see if it can deliver on such a dizzying prospect.

BridgeSTOR says its technology uses "on-premises Virtual Deduplication Appliances" and the company has a "Deduplication as a Service” (DaaS) operating expense-only cost model. Clearly it sees cloud service providers as prospective customers for its technology. ®