Flying in an enclosed area can create pressure feedback: this is where the air pressure tries to equalize on all sides and surfaces of the plane. As the air can’t escape and because the plane is moving, the air is constantly trying to equalise. Trying to compensate with a tug or twist of the joystick in reaction to the pressure is high risk: it produces an oscillation and means you slam the craft into the floor or ceiling as you try to compensate and the oscillation increases.

Fornof ran some calculations on a computer to work out the airspeed at which he could fly through the enclosed space of the hanger without producing an oscillation. Computer said: 156 knots.

“On the last pass I went just above 156 and I got one little bump,” Fornof says. 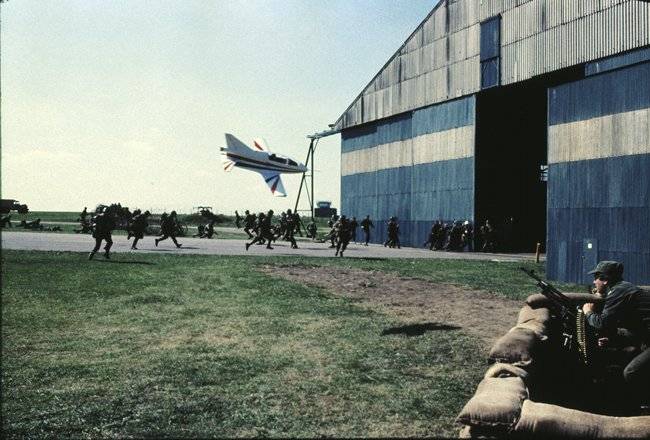 "Cubby told me: 'Do you know why we hire you? We don't hire you to take risks. We hire you because you are known to eliminate the risks'. They hire me to say no when there is no way and to get the shot when it's needed."

Bond’s pilot got an early lesson in the dangers of pressure feedback flying a P51 Mustang at low level in New Orleans, Louisiana.

"My friend said let's fly under the route I [Interstate] 10 bridge and I said that sounded cool. We went fast. The road is six lanes wide, and when I was under bridge l lost 30 knots because the air couldn't go fast enough. It felt great but if the road had been wider there's no telling what could have happened. Being young and stupid taught me a lesson for later."

For Fornof, flying is in his blood; his dad was a US Navy fighter pilot in WWII and then a test pilot and Fornof was always around planes, cleaning his dad’s Grummans, Mustang and Curtis P6. His first aircraft was a Grumman Bearcat, with Fornof flying in airshows before getting into TV.

All this has helped equip Fornof to prepare and execute perfect scenes of breath-taking magnitude to the point where the biggest risk in all Fornof's Bond shooting experience has come "on the ground, from other people". Fornof said his most worrying moment was getting jumped by gun-toting Mexican Drug Enforcement Agency (DEA) officers in the remote American South West where he'd parked one of the Cessnas at the end of a day's shoot on Licence to Kill. Fornof was wearing a dress - he'd been body-doubling for Bond girl Pam Bouvier (actress Carey Lowell) who, in the story, is the one piloting the Cessna and trying to get wheels down on the tanker truck so that Bond (Timothy Dalton) can jump aboard and scamper up to the cab.

The toughest nut of the Mexican anti-drug posse? A female agent.

"A guy who was 6ft 3inches looked at me - we'd briefed the Mexican DEA ... he came up to me and back-handed me, knocked me up against the side of the plane then rabbit-punched me in the ribs and knocked the wind out of me. They were laughing.

"I stood up and he started speaking English. Everybody knew what we were doing there but this woman agent took the barrel of an AK47 and lifted my dress and with the barrel of that gun started playing with my private parts. I tried to tell them I had papers but when I went to get them, he hit me again."

Having got their jollies the DEA melted into the bush, but that wasn't the last word as an angry Barbara Broccoli jumped on the phone to roast the Mexican authorities.

"That was the biggest danger in my life," Fornof reflects of the encounter.

For Skyfall, the set piece scenes carried their own risks. The London Underground train sequence involved months of sinking the Pinewood set below ground and building a pair of 10-tonne railway cartridges that would hurtle at 30 miles per hour across the set into a tight space and which then had to be brought to s safe stop without anybody getting hurt. All that while getting the shot, and no re-takes.

Next page: Mind the gap...
Page:
Tips and corrections
41 Comments