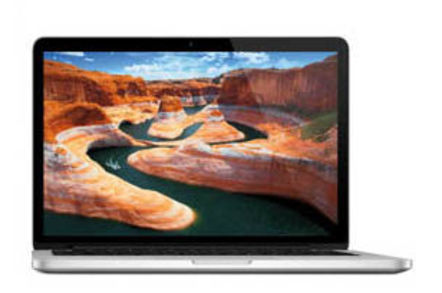 When Apple released the inelegantly named 15-inch MacBook Pro with Retina Display this June, every Cupertino-watcher knew that it was only a matter of time before the other shoe dropped and its 13-inch sibling got the same retinal treatment – and on Tuesday it did.

No surprise. The 13-inch version was first rumored mere days after the 15-incher was announced, and suggestions of its impending arrival kicked up again just last week.

Not only that, but as Apple's chief shiller Phil Schiller told the attendees at Apple's "a little more" event on Tuesday in San José, California, the 13-inch MacBook Pro is not only Cupertino's top-selling notebook, but it's also the top-selling Mac, bar none. There was no way that Apple was going to exclude that best-seller from the Retina Display party.

"In typical Apple fashion," Shiller said without a hint of modesty, "we're going to take our best product, and we're going to introduce something that's so much better."

Is it $500 better? Well, value – like beauty – is certainly in the eye of the beholder, but it's abundantly clear that the 13-inch MacBook Pro with Retina Display (Can I just call it the 13iMBPwRD? Thanks.) isn't merely the older 13-incher with an improved-resolution display slapped onto it. It's a complete rework of the top-seller, as was the 15iMBPwRD from its progenitor.

That thinness and weight loss was helped along by jettisoning the notebook's optical drive – a loss some of us find disconcerting while others could give the proverbial rat's patootie.

The main reason for the shrinkage in thickness and weight, Schiller said, was that Apple started afresh when designing the 13iMBPwRD. "Everything about the new MacBook Pro has been re-engineered from scratch," he said.

For one example, Schiller referred to the 13iMBPwRD's asymmetric lithium-ion battery technology – not exactly a brand-spanking-new juice-storing tech, but since he pointed it out with some relish, we'd be interested to know if it's the first time such batteries have been used in Apple or other notebooks.

Looking for an optical-drive slot? Stop. You won't find one

The collection of ports offered on the 13iMBPwRD are a departure from its non-Retina forebear. Gone is the FireWire 800 port, added are two full-fledged Thunderbolt ports and an HDMI port. The notebook now has two microphones rather than one, presumably to add noise cancellation for such uses as FaceTime video conferencing and OS X Mountain Lion's dictation capability.

The 13iMBPwRD is powered by a 2.5GHz dual-core 3rd Generation ("Ivy Bridge") Intel Core i5 processor with 3MB L3 cache shared between the cores, communing with 8GB of 1600MHz DDR3L memory. A 2.9GHz dual-core 3rd-gen Intel Core i7 4MB shared L3 cache is available as an option; each processor includes Intel's HD 4000 integrated graphics. Storage is all SSD, all the time, available in 128GB, 256GB, 512GB, and 768GB variants.