WHITE WHALE spent 4 years trying to tell us something, then stopped 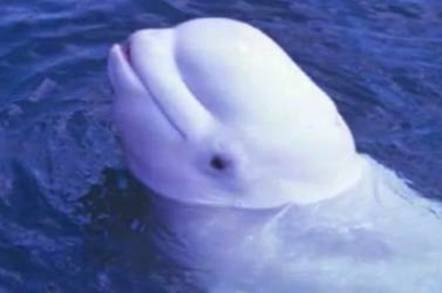 A young Beluga whale spent four years apparently trying to speak English recently, according to scientists in California. The cetacean's enunciation was apparently clear enough that it was actually discovered when the creature ordered a startled diver to get out of the water.

“The whale’s vocalizations often sounded as if two people were conversing in the distance,” says Dr Sam Ridgway, President of the National Marine Mammal Foundation. “These ‘conversations’ were heard several times before the whale was eventually identified as the source. In fact, we discovered it when a diver mistook the whale for a human voice giving him underwater directions.”

The whale in question was a young white beluga named "NOC", resident at the Foundation. According to an NMMF statement:

As soon as the whale was identified as the source, NMMF scientists recorded his speech-like episodes both in air and underwater, studying the physiology behind his ability to mimic. It’s believed that the animals close association with humans played a role in how often he employed his ‘human’ voice, as well as in its quality. Researchers believe NOC’s sonic behavior is an example of vocal learning by a white whale. After about four years, NOC’s speech-like behavior subsided.

“When NOC matured, we no longer heard speech-like sounds, but he did remain quite vocal,” Ridgway says.

The doc and colleagues from California uni and the US Navy's marine-mammal units (which are mainly staffed by dolphins) have published a paper in the journal Current Biology on the amazing speech-like efforts of the while whale, which you can also sample in the vid above.

If you believe in American literary tradition - perhaps based on a real animal - this is not the first white whale to bring a message to humanity: but it would seem that NOC's message is an altogether cheerier one. ®

Storagebod We all know spinning rust is dead. Get on with it already

Obituary When viral videos had IMPACT