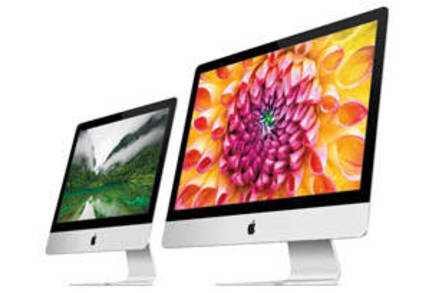 Sadly, the event also signaled the end of the presence of optical drives built into Apple's desktop machines.

The four new iMacs – two each of 21.5-inch and 27-inch models – were touted by Apple's marketing chieftan Phil Schiller as having "an amazingly thin edge" that's a mere "5 millimeters thin."

Thin is elegant and all, but such a sylphlike dimension makes the inclusion of a built-in optical drive an impossibility. An SDXC card slot remains, but it's now on the back of the all-in-one, and not on the more easily accessible side, as it was previously.

Schiller made Apple's intentions to eventually eliminate optical drives from their remaining homes in the non-Retina Display MacBook Pros and the all-but-forgotten Mac Pro when, discussing iMac options, he said, "And for those who are still are stuck in the past, yes, you can get an optical drive; we offer a great [$79] SuperDrive that plugs into USB."

Stuck in the past, indeed – he's referring to a past in which you could easily install software from a third-party CD or DVD rather than from Apple's online Mac Store, or watch DVD-based movies rather than ones downloaded from the iTunes Store. 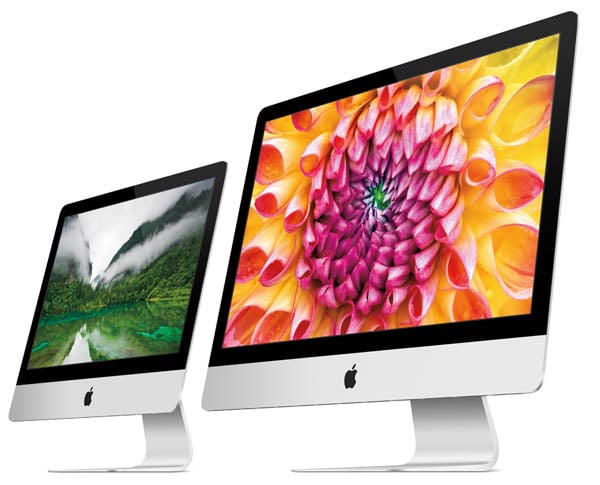 This further increase of Apple's control over your content-access options, however, is offset in part by some of the advances in the new iMacs. For example, the new iMacs are powered by 2.7GHz to 3.2GHz quad-core 3rd Generation (aka "Ivy Bridge") Intel Core i5 processors in the stock models, with 3.1GHz and 3.4GHz quad-core 3rd Generation Core i7s available as options for the top 21.5- and 27-inch models, respectively.

In addition to the SDXC slot mentioned above, the new iMacs' portage is what you might expect: four USB 3.0, two Thunderbolt, a Mini DisplayPort, and an RJ-45 port for 10/100/1000BASE-T Ethernet. Wireless connections include 802.11a/b/g/n Wi-Fi and Bluetooth 4.0.

To achieve its extreme thinness, the iMac's display is laminated directly to its glass, a process that Schiller said shaved 5mm off its thickness. "That's a huge difference," he enthused, noting that the entire display system is 45 per cent thinner than previously. The IPS displays' resolutions, by the way, are 1920-by-1080 pixels in the 21-inch models and 2560-by-1440 in the 27-inchers.

Apple has also responded to complaints from more than a few iMac owners that their displays were too susceptible to glare by adding what Schiller referred to as a "plasma deposition" process that added a nanometer-thick anti-reflective coating to the new displays.