FISH IN SPAAACE: New 'nauts and piscine pals head for Xmas on ISS 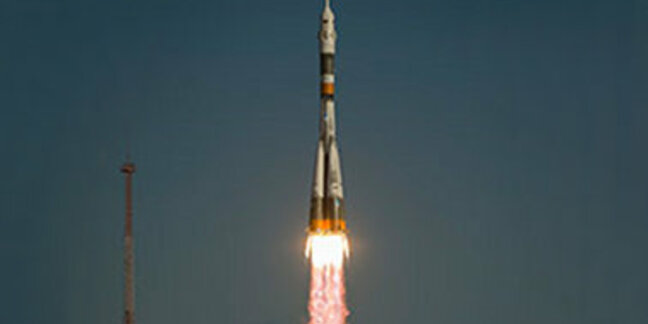 The latest crew of 'nauts are on their way to join their crewmates on the International Space Station after the Soyuz TMA-06M blasted off safely this morning.

The Soyuz capsule set off from Baikonur Cosmodrome in Kazakhstan at 10.15am BST, carrying flight engineers Kevin Ford, Oleg Novitskiy and Evgeny Tarelkin.

The NASA and Roscosmos spacemen will orbit the Earth for two days before docking with the Poisk module on Thursday around lunchtime. The crew will join Commander Suni Wiliams and engineers Aki Hoshide and Yuri Malenchenko to complete Expedition 33.

American astronaut Ford's last mission was as pilot on the space shuttle Discovery in 2009 when it flew to the space station. Russian cosmonauts Novitskiy and Tarelkin are making their first ever spaceflight.

Expedition 33 will will continue until 12 November, when Williams, Hoshide and Malenchenko set off home from the Rassvet module and Ford takes over as commander to kick off Expedition 34.

That mission, taking place over Christmas, will get its other three members in December when veteran 'nauts Chris Hadfield, Tom Marshburn and Roman Romanenko arrive.

In addition to the three 'nauts, the Soyuz is also carrying 32 small fish up to the ISS where they will participate in experiments designed to advance the frontiers of human knowledge on fish in space. ®