Microsoft: Welcome back to PCs, ARM. Sorry about the 1990s

Come in from the cold, we've got Windows RT tabs to flog 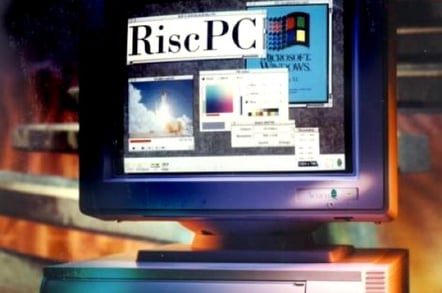 Analysis More than two decades after the alliance of Intel and Microsoft drove ARM from the battleground of personal computing, Microsoft is warmly embracing the low-power processor designer for Windows 8.

ARM was squeezed out of the then emerging and subsequently dominant platform of the time, the desktop PC, as computer makers coalesced around Intel chips running Windows software.

Not that ARM cared that much: billions of its processor cores now ship every year and are used in just about everything else from phones to handheld games consoles.

And the Cambridge-based biz hasn't been entirely absent from computers as we know them since the end of Acorn's ARM-powered Archimedes and RiscPC machines, the last model of which was launched back in 1994: ARM made a decent run of it on netbooks and its technology is at the core of the Apple iPad. Funnily enough, Apple used an early ARM processor design in its touchscreen Newton gadget in 1993.

But with Windows RT - aka Windows 8 on ARM - chips designed by the British biz will run an OS from Microsoft, the company that hastened ARM's retreat into embedded systems last century. Yet the architecture could now find its way back onto the majority of our desks.

Much of the talk on Windows 8 has focussed on the Pro edition, which will run on yet more Intel-based desktop PCs and their latter-day contemporaries - laptops and Ultrabooks - it's the version coming this week called Windows RT that has been built by Microsoft to run on ARM-compatible processors.

So what is Windows RT and what should we expect from the union with ARM, now a FTSE 100 company?

ARM-powered computers have been announced by Dell, Lenovo, Samsung and ASUS. Microsoft also has an ARM gadget coming as an instance of the Surface tablet announced in June. Surface will come in Intel-powered form too, but that won't run Windows RT as the diminutive version of Windows 8 will not be available as a packaged or downloadable product. Like a phone operating system, it will only be possible to get Windows RT on a device so you'll take what Microsoft gives you and be grateful for it.

This should be a good thing for users, meaning devices don't get hot, less charging, and snappy responses to commands. But is Sinofsky right to make such claims?

Where this RISCy business began

ARM was spun out from British computer maker Acorn in 1990 to develop and market the eponymous chip architecture, which was built for the follow up to the iconic BBC Micro - the Acorn Archimedes. ARM's processor family offered outstanding performance for a desktop computer at the time, but the Archimedes was hampered by Acorn's idiosyncratic operating system RISC OS, which bore little resemblance to what students would see and use at work when they left school.

Applications would plot Bézier curves in real time and render three-dimensional-models into two-dimensional printouts (complete with tabs to be folded and glued to construct the paper model) but then require combinations of mouse buttons and dragging just to save a file. Its menu-driven, drag-n-drop-based user interface was alien to anyone used to Microsoft's Windows.

This raw processing speed, we were told at the time, could be attributed to the Reduced Instruction Set Computing (RISC) architecture of the ARM processor beating at the heart of the Archimedes, the processor which is the grandaddy of the chip now found in every mobile phone, and the chip that will be running Windows 8 RT.

RISC systems are not, despite what we were told, inherently superior to Complex Instruction Set Computing (CISC) systems, such as those built by Intel*. In fact the difference between the two is often hard to spot, there being no definitive definition of either term. Basically it's about how many steps are involved in processing each instruction in the software being run, and how many instructions are needed to do anything useful.

So, for example, a CISC processor will have a single instruction that swaps the contents of a specific register with a 32-bit value stored in a specific memory location. The RISC equivalent may have to copy the register's original value to some temporary location, then read the desired data into the register, then move the original contents into the new-available memory location - accomplishing the same thing, but with three instructions instead of one**.

This immediately makes a mockery of processor specifications - RISC chips always do well when comparing MIPS (Millions of Instructions Per Second), but when so many more instructions are needed that's hardly relevant. Clock speed, similarly, becomes moot, especially when Intel started performing multiple instructions within a single tick.

That's not to say the early ARM processors weren't fast - they were very fast and managed to consume hardly any power at all. But much of the company's success can be blamed on the triumvirate of Acorn, Apple & VLSI, which together set up ARM Holdings in 1990 and pushed it into licensing designs rather than baking its own silicon chips.

Having failed to hold onto the desktop, ARM retreated into embedded systems, drawing up small processors that ended up controlling disk drives and the like. In these particular environments power consumption isn't a big deal, but physical size is important as is heat production, which in turn leads to the development of more very small power-efficient chips suitable for living off battery power.

Size, then, would seem to be the big thing as far as Microsoft is concerned. When it comes to Microsoft's Surface, the ARM device will weigh 676g and be 9.3mm thick versus 909g and 13.5mm for the Windows Pro Intel machine. Both feature a 10.6-inch HD display.

ARM has never made chips, instead it flogs copies of its blueprints to component manufacturers who in turn use fabrication plants to churn out the electronics. It's a model it still follows today and one which gave confidence to product manufacturers that they'd still be able to fabricate and buy the same part in a decade - something which matters a lot to hardware people.

When Personal Digital Assistants (PDAs) came along ARM was the natural choice - and even Intel eventually acquired the designs to ARM-compatible processors in a lawsuit settlement with DEC, which had worked with ARM to create the StrongARM chip. Palm convinced its chip provider, Motorola, to license ARM's design too and in 2001 Microsoft announced it would be dropping support for the Hitachi SH-1 and MIPS designs and making ARM the only platform for its mobile OS (PocketPC).

Next page: The freedom to tinker - why Apple et al really want an ARM licence
Page:
Tips and corrections
69 Comments