To beam the impossible beam 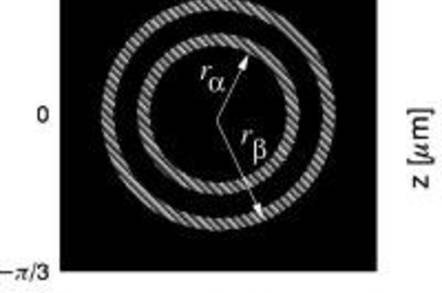 While using light pressure to move something in the same direction as light is well-understood, using beams to pull objects is a bit more difficult.

Now, a couple of Davids from New York University – Ruffner and Grier, respectively – have demonstrated just that. In a paper published in Physical Review Letters, and available in full at David Ruffner’s research page here, they claim to have demonstrated a tractor beam that can move an object either towards or away from the light source, “without the aid of outside forces”.

A beam called a Bessel beam is at the heart of the demonstration. Bessel beams direct light in concentric circles around a single dot, and this gives the beams an interesting property: they reform after passing an obstacle. In mathematics, if not in real life, such beams could propagate forever, because they don’t suffer the diffraction that scatters ordinary lasers.

The way that Bessel beams reform behind a (small) obstruction has already made them useful for optical tweezers, but Ruffner and Grier found that a single beam couldn’t be sufficiently tuned to act as a tractor.

To create the “tractor beam”, the researchers added a second Bessel beam, and then varied the relative phase of the two beams. This makes the optical trap created in the beams move – and the trapped particle moves with the trap, “allowing bi-directional transport in three dimensions”, they write.

As New Scientist explains, the interaction of the two Bessel beams creates an alternating pattern of bright and dark regions. With the right tuning, photons in the bright regions scatter back towards the light source, creating a pico-scale light pressure that pushes a particle in the beam towards the next bright region.

The demonstration by Ruffner and Grier is not, however, ready to trap the Starship Enterprise: they demonstrated its effectiveness by moving microscopic spheres of silica, suspended in water, over distances of 30 micrometers. ®

Bootnote: This is, by the way, different from optical tweezers, which already exist. They can move micro-scale objects in two dimensions, but don’t exert a noticeable pull towards the beam source. ®

The Register Lecture: How to build your own tractor beam

Video The current state of the art, apparently