Rival fondleslabs have little to worry about 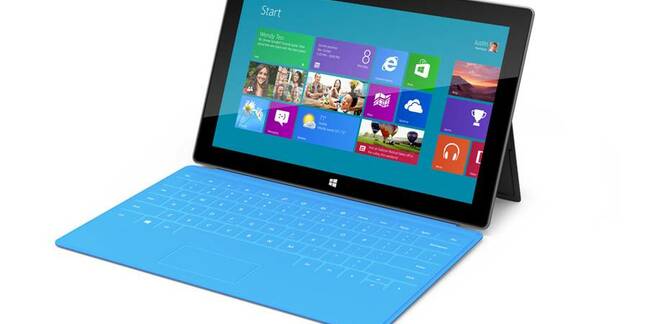 Analysis Microsoft has at last released some more details on its Surface tablet – including pricing – but based on what we've seen so far, Apple and Android-tablet makers don't have much to worry about.

First the good stuff: Microsoft appears to have created a system that, on the face of it, could give Apple a run for its money – at least at the low end. Punters can buy a 32GB Surface tablet for $499 without the cover that doubles as a keyboard, $599 with the keyboard, or $699 for the 64GB version with the keyboard.

That gives you the base specification pricing, but Microsoft has some accessories that will bump up the total price. If you want a cover that isn't black – "so customers can express their personal style," as Microsoft puts it – that'll set you back $119.99. A Type Cover (the keyboard cover with more key travel for easier typing), will run you $129.99. If you want an HD Digital AV or VGA Adapter, they'll cost you an extra $40 apiece, along with another $40 for a separate power adapter.

Surface tablets come with an ARM-based Tegra 30 processor, 2GB of RAM, and a 10.1-inch display running at a resolution of 1366-by-768 pixels. All Surface tablets are Wi-Fi–only, with no 3G or LTE versions available, although they do come with a very welcome microSD slot and BlueTooth. Battery life is a claimed eight hours of "mixed activity," or 7-to-15 days of idleness, but there'll be no way of verifying that before their launch on October 26.

On the software side, you get Office RT, which will be a cut-down version of the Office 2013 build for x86 tablets, based on what Microsoft is saying at the moment. SkyDrive capability is built-in for cloud storage, and Redmond promises a host of games and music apps as well. True, the app store is looking a little empty at the moment, but Microsoft is promising big things.

As for the competition

So how does this stack up with the competition? On the face of it, Microsoft has undersold its chief tablet rival Apple at the low end of the market. The 16GB iPad costs $499, so Apple's got half the storage for the base model. But move up to 32GB Surface and you're getting pretty much the same as a 32GB iPad, albeit without a cover that doubles as a keyboard; the same is true for the 64GB version. Microsoft has made a huge deal about this keyboard, but given you can buy an iPad add-on keyboard for less than $100, it had better be very good indeed.

The iPad does have a number of advantages, however. Cupertino has trumped Redmond on screen resolution and possibly battery life. More importantly, it has the applications that make a tablet something more than a fancy doorstop. Any app vendor that wants to make money has to develop for the iPad; the same is not true for Windows RT.

Android fondleslabs typically operate at the low end of the price spectrum, and here too Microsoft might be able to steal some market share. But in countries where it isn't banned by legal shenanigans, Samsung and others are selling a respectable number of tablets for less than a base specification Surface; Asus will even throw in a keyboard for less.

The range of apps you can get for an Android tablet is also nearly as good as Apple, and pricing-wise there's not much difference between the two. Neither have a good Microsoft Office solution, but that doesn't seem to have hurt them too much in terms of sales and user annoyance.

There's also the Ultrabook market to consider. Intel is trying to get Ultrabooks down to the $699 price point, and faced with the choice between a slim laptop that can run full Windows 8 and Office 2013 or a tablet running cut-down versions, consumers could be expected to go with the more versatile Ultrabook rather than a Surface fondleslab.

What's worrying El Reg is that Microsoft seems to be trying to play the Apple PR game with the Surface: with 10 days before the launch, there are no review units out in the field. A very few select journalists were invited up to Redmond to try out the Surface systems this week, presumably those whom Microsoft feels are on its side, but even they couldn't do a proper test of the system's speed or battery life.

It's a trick that Apple has played very well over the years. You only have to take a look at the early reviews of iOS 6 to see that it's easy to get good press this way – but then the backlash kicks in. More than a few of Apple's chosen few have come in for severe criticism for glossing over the uselessness of functions such as Apple's Maps in order to avoid annoying their Cupertinian chums, and it'll be interesting to see if the same is true for Microsoft.

This lack of solid pre-release information leaves buyers in something of a quandary. Some people may be willing to wait outside Microsoft stores at midnight on October 25 to buy an untested machine for a minimum of $500, based only on what Redmond is telling them, but the vast majority of potential buyers won't – and developers aren't going to jump on board until they see there's a clear market.

While Steve Ballmer predicts great things for the Surface, the company did say at the Surface announcement in June that it isn't looking to compete with OEMs who also want to develop a tablet for Windows RT, it just wants to show them how it's done. So on one level it doesn't really matter if Surface fails to move in large numbers.

The only problem with this argument is that it really does matter – for Windows 8, at least. The new OS with its not-Metro interface really only makes sense for touch users, and since the vast majority of laptops are sold without touchscreens, the tablet is going to be Redmond's top display system for the new interface.

There's also the issue of market segmentation. Microsoft is breaking down its hardware, OS, and key applications into a series of choices: x86 v ARM, Office for tablet or for PC, etc. It tried something similar with the many flavors of Vista, and there's very little evidence that customers like this kind of marketing.

On the pricing front, the Surface has pretty much matched its chief iPad rival, but that probably won't be enough to hurt Apple. Rightly or wrongly, Apple has the cool factor for fondleslabs, and if Surface is to woo those users it'll have to offer either a serious price advantage or some other unique selling point. Being as good isn't going to cut any ice in market share – Surface needs to be better, and on current information there's nothing here to make people switch sides.

The next six months should give some indication as to the success – or otherwise – of the Surface. On the face of it, the tablet looks very interesting, but the devil is in the details and there's a very long way to go before the system can be properly assessed. ®