Skydiver Baumgartner in 128,000ft plunge from brink of space 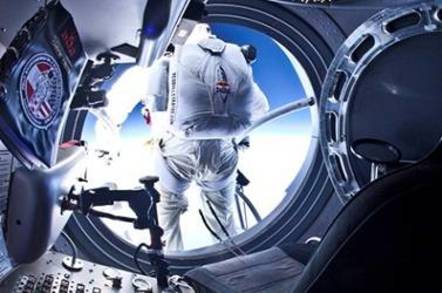 Updated Skydiver Felix Baumgartner jumped 128,000 feet (24 miles, 39km) out of a balloon today, to complete the highest skydive in history.

It took just under 10 minutes for the Austrian to reach the desert surface below.

The Red Bull Stratos space capsule finally got off the ground at Roswell, New Mexico, following two aborts on the 8 and 9 October due to unfavourable winds.

Former US Air Force test pilot Joe Kittinger - who in 1960 set the old skydiving record of 31,330m (102,800ft) - was in mission control to offer support via radio to the wedding-tackle-of-steel Austrian.

After making the second longest ever free fall (Kittinger's remains the longest in duration ever) and then landing safely in the desert, Baumgartrner described his astonishing ascent and descent:

"First we got off with a beautiful launch and then we had a bit of drama with a power supply issue to my visor," he explained. Apparently the daredevil's visor demister proved a bit troublesome, causing worries that he would be unable to see, but the mission went ahead nonetheless.

“The exit was perfect but then I started spinning slowly. I thought I’d just spin a few times and that would be that, but then I started to speed up. It was really brutal at times. I thought for a few seconds that I’d lose consciousness. I didn’t feel a sonic boom because I was so busy just trying to stabilize myself. We’ll have to wait and see if we really broke the sound barrier. It was really a lot harder than I thought it was going to be.” 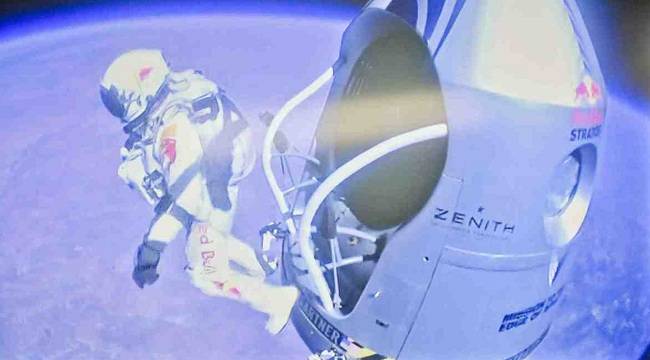 According to the Red Bull Stratos project:

Whether the sound barrier was actually breached is a complex matter as the absolute speed of Mach 1 varies with height. However Baumgartner may very well have gone supersonic as he fell - data analysis will give an answer presently. The various records remain unofficial for the moment, pending verification by the FAI, world body in charge of such things. ®

If the heroic Baumgartner did go supersonic he will not be the first to do so, nor the record holder for fastest human body travelling through the air. That title is held by Bill Weaver, the pilot of an SR-71 "Blackbird" ramjet spy plane, whose aircraft disintegrated in midflight in 1966 while travelling at better than Mach 3. Weaver, though he did black out, survived, despite the fact that his ejection seat reportedly never left the plane: and he will probably remain the holder of this particular exotic record for some time to come. Sadly his systems-operator companion Jim Zwayer died during the crackup.

One person's harmless japery can be another's night of LaserJet Lego

Who, Me? For goodness sake, please don't go reading any printer manuals