Madam, if I were your husband I should read them

The man who famously stated that the British would "fight them on the beaches" in the event of a German invasion has had some of his less-often quoted words including his private letters (and his receipts for cigars) fully digitised and made available online in the Churchill archive.

Winston Churchill's private musings, letters to Stalin, doodles and appointments diaries are now on the internet after two years of painstaking digitisation at Churchill College, Cambridge.

The haul of papers documents all areas of the great man's life and times from the most trivial to the most important. 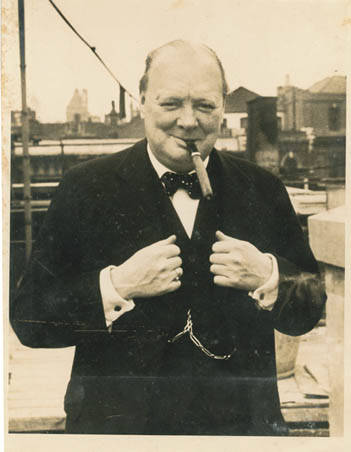 A man of many words, now available in a searchable archive

Access to the digital papers is only by subscription, but the searchable catalogue contains a précis of each paper online.

Amidst preparatory notes for his great speeches, there's a 1933 memorandum on Hitler's likely long-term plans as laid out in Mein Kampf, and mid-war July 1942 there's a top secret telegram to Stalin including plans to send supplies to Russia through Iran.

From 1918 there is a £28 estimate from a builder who had assessed the cost of building two pig houses at Churchill's country home.

And there papers from Churchill's younger days too - receipts for £5-worth of cigars from 1912, details of an 1896 libel case that Churchill, then aged 22, won against an A C Bruce Pryce who had accused the young Churchill of "acts of gross immorality of the Oscar Wilde type", and a description in a letter to his mother of how he spent his time playing polo and catching butterflies while stationed in Bangalore with his regiment in 1896.

The online copyright is held by Bloomsbury Publishing and the original papers are held at Churchill College, Cambridge. ®

You want a remedy? Here's our remedy