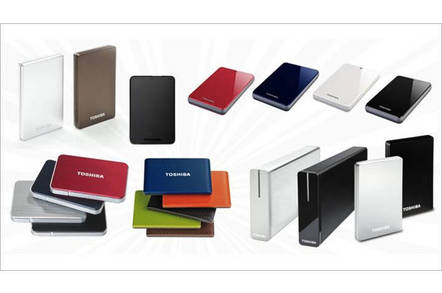 Toshiba has joined Seagate and WD with a single platter 500GB drive for thin notebooks, DVRs and the like.

The MQ01ABF is essentially half an MQ01ABD, a 2-platter 2.5-inch drive storing up to 1TB. Like that drive it spins at 5,400rpm, has an 8MB cache and a 6Gbit/s SATA interface. Unlike that 9.5mm thin drive it is 7mm thin, the z-height measurement, and weighs 92 grams.

The new drive is destined for ultrabooks and other thin devices like digital video recorders, that need as much capacity as possible in a 7mm high slot but don't need very high performance, such as that provided by Toshiba's MQ01ABD-H hybrid flash and disk drive. It would be logical for Toshiba to introduce a hybrid version of the MQ01ABF for customers needing high IOPS performance in a 7mm slot; ultrabook users come to mind.

The MQ01ABF comes in 250GB, 320GB and 500GB variants and has a low noise level and good vibration resistance. It joins the single platter Seagate Momentus Thin which stores up to 320GB in its 7,200rpm version and 500GB in its 5,400rpm version. Both have a 16MB cache.

Western Digital has a 500GB single platter Scorpio Blue with a 5,400rpm spin speed, 6.8mm z-height. WD's Hitachi GST subsidiary has a Travelstar Z5K500 with 500GB on its platter spinning at 5,400rpm and a Z7K500 spinning at 7,200 with a 32MB cache. That would seem to be the fastest pure 500GB single platter drive on the market – unaided by a flash cache that is. There is a Cinemastar Z7K500 version of this drive for digital video recorders (DVRs) and set-top boxes.

We would expect Toshiba, Seagate and WD to bring out hybrid single platter drives in the future as well as, eventually, 750GB capacity versions, perhaps using shingled magnetic recording. ®