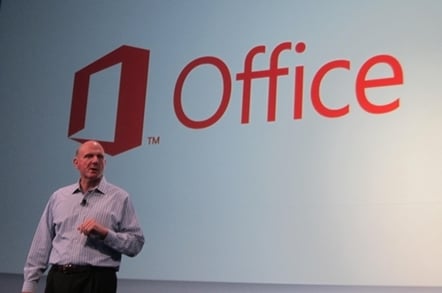 Microsoft has put the finishing touches on Office 2013, paving the way for the latest version of Redmond's flagship productivity suite to reach general availability in the first quarter of 2013.

An early preview of Office 2013 has been available for download since July, but that trial version lacked some features, including promised touch-friendly apps for Windows 8. With the announcement of the Release to Manufacturing (RTM) build, Redmond has signaled that the suite is now feature-complete and ready to ship through various distribution channels.

"This is the most ambitious release of Office we've ever done," Kirk Koenigsbauer, corporate VP of Microsoft's Office Division, wrote in a blog post on Thursday. "We are proud to achieve this milestone and are eager to deliver this exciting release to our customers."

Of course, some of those customers will take delivery sooner than others. As is generally the case, subscribers to the Microsoft Developer Network (MSDN) or Redmond's TechNet program for IT professionals will get first crack at the final Office code, which should hit Microsoft's download servers sometime in mid-November.

Retail customers may be left waiting until as late as March – the exact ship date for the boxed version of Office 2013 is as yet unspecified. But retailers will be pleased to hear, at least, that they won't be stuck with lots of unsold copies of Office 2010 while customers wait for the new version to hit the channel. Beginning on October 19, anyone who buys Office 2010 will automatically be eligible for a free upgrade to Office 2013 once it hits general availability.

That might not be as good a deal as it sounds, though. Microsoft has been aggressively promoting its Office 365 subscription program as an alternative to the perpetual-licensing model it has offered in the past. In addition to the full suite of Office applications, Office 365 customers get access to bonus cloud services and additional features not available to buyers of the boxed version of the suite.

Unfortunately, it wasn't immediately clear when Office 365 customers would get access to the new versions of the Office apps.

"We will begin rolling out new capabilities to Office 365 Enterprise customers in our next service update, starting in November through general availability," Koenigsbauer wrote – but he neglected to explain just what this meant, or when non-enterprise Office 365 customers could expect similar upgrades.

When contacted for clarification, Microsoft reps told El Reg, "We don't have specifics to offer at this time on what Office 365 subscribers will receive. Please stay tuned for more specifics on general availability dates and other Office launch news." ®