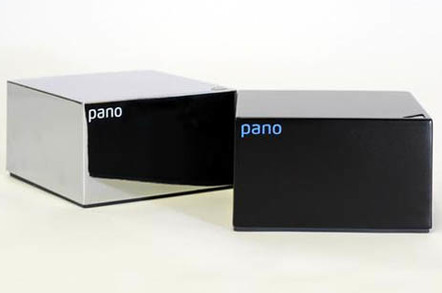 Sysadmin Blog Around this time last year I reviewed Pano Logic's Zero Client Solution, a sort of super-thin-client set of kit. I was test-driving the company's first-generation hardware and a software suite two versions behind the latest release. I've now had a chance to review the second-generation hardware with its latest software, and I remain impressed with what they can deliver.

The basic rules of zero clients have not been changed. The selling point of these little cubes - which simply pipe USB and video over Ethernet - is the ability to eliminate some of the initial capital cost and virtually all of the long-term endpoint maintenance security expenses.

Pano's solution is faster and smoother than standard RDP and beats out Wyse's enhanced RDP thin clients in most scenarios.

Where Pano falls down is moving beyond the capabilities of software-rendered video. Pano can drag 1080p video or flash animations down a wire just fine. What it cannot do is take advantage of hardware acceleration as provided by technologies such as RemoteFX, VMware View or Citrix's HDX.

With a thin client, the client hardware is a low-spec PC. That means it can run any of these protocols, assuming the thin client hardware has enough oomph to drive it. RemoteFX takes advantage of the host-guest integration provided by the Microsoft-on-Microsoft stack to provide a limited hardware accelerated experience. VMware View can virtualise an Nvidia Quadro or Tesla video card to provide full workstation-class graphics acceleration. Citrix's HDX (as usual) does what everyone else does but goes a step farther; pushing the limits of VDI provisioning over thready WAN connections.

To accomplish 3D acceleration in a VDI environment, the underlying hypervisor (in one way or another) makes a virtual graphics adapter available to the guest operating system. The rest is fundamentally no different than using a graphics card with a physical system. Graphics drivers need to be installed that can talk to the exposed card and they pipe the output to a display. Instead of outputting to a monitor, the output is sent to a software agent running on the operating system.

The software agent compresses the video output and sends it across the wire to a client. These same protocols include the ability to transfer data from mice, keyboards and other peripherals from an endpoint to the virtual machine agent and vice versa. Pano's solution is not all that dissimilar. It relies on client-side software in the VM to speak a proprietary protocol to receiving software - or in the case of Pano's zero-client proprietary hardware - which decodes it.

Negotiating the tech licensing will be harder than the programming

There is no technical reason Pano should not be able to eventually update its software to take advantage of these virtualised graphics adapters. Licensing, API access and other such fun business-level negotiations will always be harder than the coding. I expect that some day Pano will break the hardware-accelerated graphics barrier, eventually providing workstation-class 3D graphics on zero-client hardware that is dirt cheap and maintenance free.

While it's 3D acceleration that gets me excited about VDI, that market is still very niche. There's a lot of money in providing a standardised "basic business desktop", and this is something Pano does well. There is no pressure to break the hardware graphics barrier in the immediate future; they have the opportunity to take their time and get it right.

For today, Pano's efforts have gone into being hypervisor agnostic; their solutions work well on VMware, Microsoft, or Citrix. In the low TCO, faster than RDP VDI market Pano have become the guys to beat. That's a good base from which to start launching assaults on more challenging market segments.

If you are considering a Pano-based system from scratch, I'd recommend basing it on either VMware or Citrix. Pano on Microsoft requires SCVMM, and the interplay between the two is just enough of an added layer of difficulty that it doesn't make my Christmas list. Perhaps more importantly, the graphically accelerated solutions offered by VMware and Citrix are far more promising. Moving beyond Microsoft's ecosystem means bringing in support for both DirectX and OpenGL.

Pano makes economic sense for today's common VDI tasks. The hypothetical hardware-accelerated Pano-VMware or Pano-Citrix offering of the future promises to be a lot cheaper and more capable remote workstation experience than Microsoft looks set to deliver. This leaves me liking these little Pano cubes and anticipating eager to revisit Pano next year; I want to see what these folks can do with another year's worth of R&D. ®