Astrobotic Technology, a privately funded spacecraft developer, has announced that its has completed a full-size prototype of its second Moon rover, Polaris, which is scheduled to fly in October 2015 aboard a SpaceX Falcon 9 rocket.

Polaris is one of two Moon rovers under development by Astrobotic in competition for the Google Lunar X Prize, which offers a total of $30m in awards to privately funded projects exploring the Moon.

First prize – $20m – will be awarded to the company that can "safely land a robot on the surface of the Moon, have that robot travel 500 meters over the lunar surface, and send video, images and data back to the Earth."

A spinoff of Pittsburgh, Pennsylvania's Carnegie Mellon University, Astrobotic Technology is one of 25 teams currently vying for the prize, including nine from the US and three from the UK; another eight teams have dropped out of the competition.

Astrobotic's other Moon-roaming vehicle, Red Rover, is currently scheduled to get its chance to be the company's first competitor in the Lunar X Prize race: its Payload User's Guide (a great read for space junkies) notes that Red Rover is scheduled to make its first trip sometime between December 2013 and April 2014, also aboard a Falcon 9, and also coupled with Astrobotic's lunar lander, Griffin.

Astrobotic and the rest of the competitors need to hurry: that first prize of $20m for the team that can first accomplish the stated objectives will drop to $15m if a government-sponsored craft gets there first, and China's Chang'e-3 soft-landing probe and smallish rover is scheduled to launch in the second half of next year. Space agencies in Russia and Japan also have their eyes focused moonward. 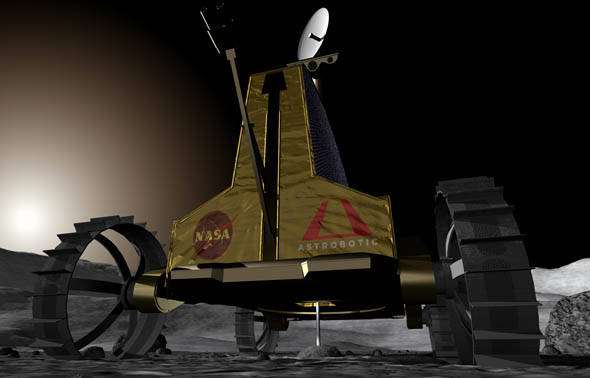 Astrobotic's Polaris rover: searching the Moon's north pole for a drop to drink (click to enlarge)

Second place in the Lunar X Prize will get you $5m, another $4m will be awarded for other "specific objectives", and that last $1m will be awarded to the company that "demonstrates the greatest attempts to promote diversity in the field of space exploration."

The attempt to achieve one of those "specific objectives" is where Polaris comes in: the Lunar X Prize includes an award for detecting water, the task for which Polaris is designed.

At 5.5 feet tall, 7 feet wide, almost 8 feet long, weighing 150 kilograms (330 pounds), and able to carry an instrument package of up to 70 kilograms (154 pounds), Polaris is one hefty fellow. However, it's far zippier than NASA's Curiosity rover, currently cruising about on the Red Planet: Polaris redlines at about one foot per second, while Curiosity plods along at 0.08 feet per second.

But Polaris' raison d'être is not to best other rovers in lunar drag racing; it's there to find water – or, more specifically, water ice – by drilling sample holes at the Moon's north pole.

Since sunlight at the Moon's north pole will strike Polaris' power-providing solar panels from low on the horizon, those panels are positioned nearly vertically on the rover's body, where they should be able to capture about 250 watts worth of power.

Although the moon rotates every 27.3 days, Astrobotic says that only 10 are suitable for drilling – presumably because some of the other days are either in cold, dark lunar dawn or dusk, or even colder and darker lunar night. Polaris should be able to complete somewhere between 10 and 100 test holes in that 10-day window – a broad range, but there are many unknown variables to consider such as landing site composition, roaming conditions, and the rover being positioned in long power-draining shadows. 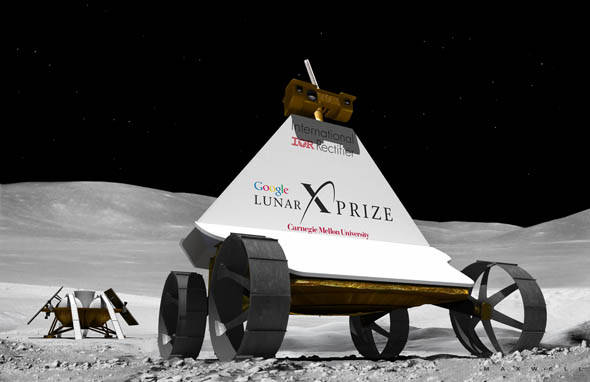 Red Rover is scheduled to beat Polaris to the moon, and perhaps win the Google Lunar X Prize (click to enlarge)

That first 10-day test period could be repeated into the foreseeable future, but only if Polaris can survive the heinously frigid temperatures of the north pole's long lunar night – and Astrobotic isn't making any promises.

The discovery of H2O on the Moon could be a boon for future long-term or even permanent human-occupied installations on our nearest neighbor. In addition to providing water for a broad range of human needs, it could also be a source of useful H and O.

Unlike Polaris, Red Rover won't be rumbling about the Moon's northern climes; it's scheduled for touchdown in the comparatively balmy central latitudes, where its solar panels will provide a hefty 500 watts of power, enabling it to zip along at 15 centimeters per second. If, by the way, you'd like to rent space on Red Rover, check out the aforementioned Payload User's Guide for details.

Surface exploration and water prospecting are not the only things on Astrobotic's mind. The company announced this August that it had received a contract from NASA "to develop technologies for exploring caves on the Moon, Mars, and beyond" as one of the 10 finalists in NASA's Institute for Advanced Concepts (NIAC) Phase II competition.

Interplanetary spelunking – that's one example of a government-supported plan that this Reg reporter can definitely get behind. ®