Oklahoma: Where the wind comes sweepin' down the plain 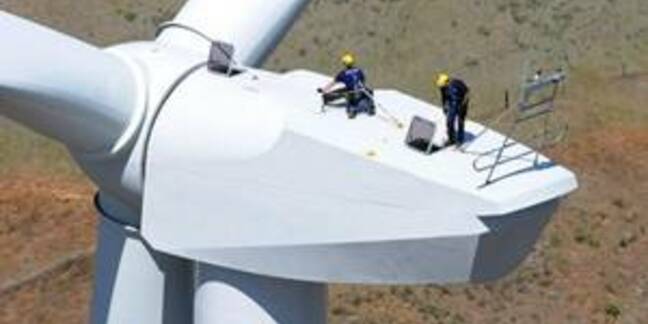 Google has signed a contract to obtain 48 megawatts of wind energy from the Canadian Hills Wind Project in Oklahoma to power its data center in that state.

This is the first time Google has actually bought wind power from a utility, in this case the Grand River Dam Authority (GRDA), rather than direct from a wind farm itself. It already has a contract for power from coal-fired plants from GRDA, but will buy the greener power at a premium to beef up its renewability chops.

"We're a growing company with a corporate mandate to use clean energy for our operations in a scalable way," said Gary Demasi, director of Google's global infrastructure team. "We've been working closely with all of our utility partners to find ways to source renewables directly, and we look forward to working with other suppliers to deliver clean energy to our datacenters."

So far Google has signed up for over 260MW of renewable power for its offices and data centers, and this latest buy will earn the company even more kudos from Greenpeace. The environmental lobbying group has already been patting Google on the back but with this announcement went as far as suggesting that the purchase could help its long-running battle for search users with Microsoft's Bing engine.

"While both Google and Microsoft have committed to being 'carbon neutral,' unlike Google, Microsoft has yet to significantly invest in clean energy," said Greenpeace's senior IT analyst Gary Cook in an emailed statement. "Microsoft has instead continued to build data centres attached to dirty sources of electricity and sought to mask its dirty energy supply with carbon offsets and renewable energy credits."

This strikes El Reg as a tad optimistic. There's precious little evidence that internet users are at all motivated to pick one search engine over another based on their relative carbon footprints, preferring more traditional differentiators like being able to find the right information. ®