New CEO Rometty has the reins, spurs, and saddle now 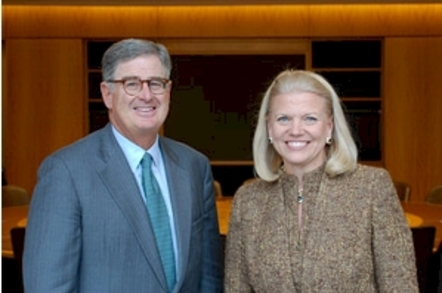 This is Sam Palmisano's last week at the top of IBM, a company he has been running more or less since he was tapped to be president and chief operating officer back in July 2000.

Ginni Rometty, who had previously run IBM's worldwide sales and marketing group and a chunk of the Global Services behemoth for many years, was tapped for the president and CEO posts back in October 2011, leaving other contenders in their posts and running the two halves of the company.

Specifically, Steve Mills is in charge of the converged Software Group and System and Technology Group parts of Big Blue that do systems and software, while Mike Daniels is in charge of Global Services, which he took full control over when Rometty moved up to run Big Blue's sales operations for a year.

In a statement, IBM said that Rometty will become chairman of the board effective October 1, the same day that Palmisano will step down and move off into retirement. If Palmisano, who is 61, is like his predecessor Lou Gerstner, he will get involved in education reform and private equity – but it's equally likely that he will just play golf and enjoy his retirement.

A Rometty strategy has not emerged yet, and that's not surprising seeing as how Palmisano took his lessons from Gerstner and is still more or less using the same plays. This involves staying in the systems business despite low profits because of the high software profits it generates, and utterly dominating services while offshoring as much of the work as possible overseas.

Palmisano was really Gerstner-II, and it is probably a fair guess that Rometty will be Gerstner-III and upset as little of the applecarts on Old Orchard Road in Armonk, New York, as possible.

That said, Rometty faces some tough choices, particularly in the systems business as the cost of each successive generation of wafer-baking technology gets more and more expensive.

With the Unix market in decline, even as IBM grows its market share it is not growing the aggregate Power Systems business enough to offset the increase fab costs it will face in future years. The embedded Power chip business is under threat from x86 and now ARM alternatives, and if Big Blue loses the game-console business from Sony, Microsoft, and Nintendo, there could be a cascading effect on IBM's chip facilities in Vermont and New York.

It is not hard to imagine IBM selling off its chip business to GlobalFoundries or Taiwan Semiconductor Manufacturing Corp and focusing on chip research and processor design, just to cut some of its capital costs – much as AMD has done. ®