Why Oracle must kiss goodbye to its database past

Moneybags Larry hopes cloud will shower him in cash 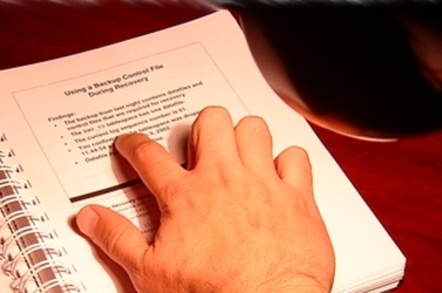 Open ... and Shut A few years back Apple opted to drop the "Computer" from its corporate name, and instead became "Apple Inc." Last week, Oracle made a similar move, quietly stopping its decades old practice of reporting database revenues. Oracle chief executive Larry Ellison was quick to point out on Oracle's earnings call that for its database sales force "it's business as usual." But is it? By opting to stop breaking out its database numbers, Oracle is telling the market that it's no longer a database company.

Oracle wants investors to pay attention to something else now, and is changing what it talks about to make that happen….[I]f you don't report database revenue, you're no longer a database company. And I bet Oracle leadership would agree with that statement.

Not that Olson thinks the move is insignificant. In announcing the shift, he wrote: "Oracle Corporation no longer breaks out database revenues in its earnings reports. Next up: Frogs. Locusts." Steven J. Vaughan-Nichols, a long-time Oracle observer, for his part, "find[s] it troubling," arguing that "at the end of the day, [databases are] what defines them" and that analogous changes would be "IBM not reporting on mainframes, MSFT on Windows, etc."

Despite initially pooh-poohing the cloud, Oracle has doubled-down on cloud computing. It has also acquired a mass of companies selling everything from applications to hardware. In the midst of that "cloud" of software services and on-premises software that Oracle now peddles, the database has become just component among many in Oracle's arsenal, as Sean Kerner points out:

And yet, Oracle president Mark Hurd insists that it continues to have a dedicated database team that does nothing but sell its database offering. Surely that team is being compensated for those sales, so figuring out total database sales must remain reasonably straightforward.

If Oracle wanted to do so. But, apparently, it doesn't.

The charitable, and perhaps correct, view is Olson's. But others are less sanguine about Oracle's rational and, indeed, about its business, generally. Cowens & Co analyst Peter Goldmacher had this to say:

Management claims of investing in Sales and Marketing ring hollow considering Sales and Marketing spend is down year-over-year in absolute terms. Revenues are in structural decline as every segment of Oracle's business is under attack from a new generation of technology providers that offer equivalent or better technology at a lower cost. But as long as management can continue to cut costs faster than revenues slow, earnings will grow, until they won't. No part of the bull case for Oracle... addresses growth, competitiveness or market share gains.

Painful, but possibly true. Oracle, after all, is seeing its applications business under siege from more nimble competitors like Workday, while its core database business is under threat from a long-term shift to non-relational database and Big Data competitors like Cloudera (currently an Oracle partner) and 10gen (MongoDB).

Given the headwinds facing Oracle, coupled with the difficulty of changing direction for a company that employs 120,000 people, it's perhaps not surprising that Oracle is trying to shield scrutiny from the inevitable pain it's going to feel in individual product lines while it moves to becoming a true cloud computing company. El Reg's own Timothy Prickett Morgan emphasizes that Oracle's change in product revenue reporting means "we have no idea how these business units are doing individually anymore."

Which is almost certainly the point. As Ellison noted on the Oracle earnings call:

Reading between the lines, Ellison seems to be acknowledging just how difficult this transition to the cloud has been (Oracle has been working on its Fusion technology for seven years), and will continue to be. Buying some breathing room by focusing on the big picture (cloud) while minimizing short-term pain in individual products (such as databases or applications) is a smart move.

And a painful one. As ZDNet's Larry Dignan highlights, Oracle has spent years dabbling in hardware, only to have the hardware business consistently underperform and distract the company from getting fully into the cloud. Apparently Oracle has learned its lesson. What remains unclear, however, is whether shifting to the cloud will prove as successful as decades of database dominance have been. In the cloud Oracle is a neophyte, albeit one with gargantuan resources behind it.

No matter how Oracle financially engineers the painful shift to the cloud, at some point it's going to have to show financial results. So far, they don't look pretty. With all the competition it's facing, they may never look pretty. But full credit to Oracle for engineering a transition to the cloud, even if it had to abandon its past glory as a database giant to do so. ®