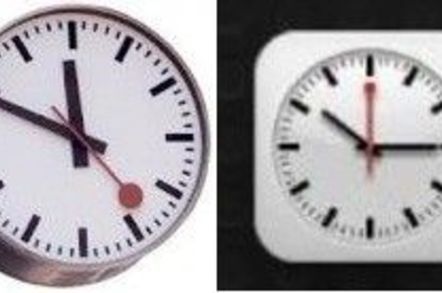 As hipsters and tragics queue for new iPhones, Switzerland's railway operator, SBB, has complained that Cupertino copied its design for the clock display used in iOS6.

Your rounded corners might not save you: SBB's railway clock (left)

While expressing "joy" that iOS6 uses what it clearly believes is a straight copy of its design, SBB says Apple did not ask its permission, in this story (Google translation chosen to make it even funnier).

SBB spokesman Christian Ginsing told the publication Tages Anzeiger that the design is copyrighted and is an SBB trademark. Tages sought comment from Apple - but you can probably predict the outcome of that request.

The "classic" design, SBB says, was created in 1944 by Hans Hilfiker.

Meanwhile, Australian and New Zealand buyers are feeling the same mapping pain as El Reg earlier reported from the UK, with an abundance of errors rendering the new iPhone mapping nearly useless.

New Zealand IT journalist Juha Saarinen said that in Auckland, the maps are so incorrect as to be useless, while iiNet's John Lindsay suggested "Move yr business to where Apple says it is. That's the Apple way." ®