May not even need 17,000 megaton superbomb for power 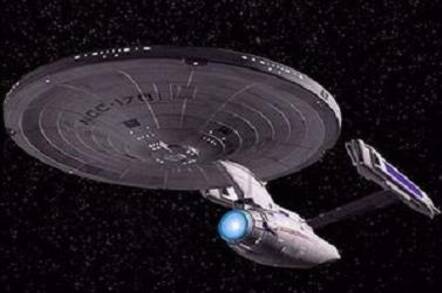 A top NASA boffin has outlined ongoing lab experiments at the space agency aimed at first steps towards the building of a warp-drive spacecraft theoretically capable of travelling at 10 times the speed of light.

The latest developments at the "Eagleworks" super-advanced space drive lab at NASA's Johnson Space Center were outlined by NASA physicist Harold White at a conference on Friday. The Eagleworks lab was set up at the end of last year to look into such concepts as the Quantum Vacuum Plasma Thruster and also so-called "warp drives" along the lines proposed by Mexican physicist Miguel Alcubierre in the 1990s.

Quantum thrusters are fiendish kit indeed, but would be mainly of use for explorations within our own solar system. As most Reg readers are well aware, however, this is a rather limited canvas for humanity to work on for eternity: especially as it seems likely that there may be some rather more hospitable alien worlds to be found orbiting other suns.

The big snag with worlds orbiting other suns is of course that they are utterly, ridiculously far away and according to the laws of physics nothing can travel faster than the speed of light: meaning that journeys even to a few of the nearest stars would take years at the absolute minimum, and in general interstellar voyages would simply not be on human timescales.

Thus much classic scientifiction has assumed the development of warp drive, hyperdrive, stargates etc - some means of getting to other stars faster than light could. Alcubierre's calculations over a decade ago appeared to show that such a thing was at least theoretically feasible: using a ring of exotic matter, a bubble of unwarped, flat space with a starship in it would be transported through normal space at effective speeds perhaps 10 times lightspeed by warping the space around it. Nothing would actually travel through any space faster than light, and the laws of physics would be unviolated.

Unfortunately, subsequent investigation appeared to show that while the warp drive might work it would be unfeasibly power hungry: it would require a minimum amount of energy equivalent to completely annihilating the mass of the planet Jupiter.

However White and his NASA Eagleworks colleagues say that's not necessarily so: it's all down to the shape of the ring. An improved doughnut design, as opposed to a flat ring, would get the requirement down to something more like just annihilating the Voyager One probe craft.

Voyager masses in the region of 800kg, so by our calculations one would still need a lump of antimatter (or other reasonably compact super power source) which - if it were mishandled - would explode with a force of some 17,000 megatons, equivalent to several global nuclear wars all in one (or 600-odd Tunguska meteor strikes etc). This would inconveniently take humanity's current atom labs billions of years to make, and there would be other practical issues (see our previous antimatter-bomb analysis here, and then there'd be the exoto-doughnut to fabricate etc).

But White's not done yet, we learn courtesy of SPACE.com, reporting from the 100 Year Starship conference last week. The NASA brainbox calculates that cunningly oscillating the warped region around the spacecraft could cut power requirements by another big margin.

"The findings I presented today change it from impractical to plausible and worth further investigation," White told SPACE.com. "The additional energy reduction realized by oscillating the bubble intensity is an interesting conjecture that we will enjoy looking at in the lab."

It's all pretty crazy stuff: but as various conference attendees correctly pointed out, if human beings are ever going to have anything much to do with the universe around us - as opposed to remaining confined almost totally to our own planet or at best the immediate neighbourhood around our tiny, insignificant pinprick home star - crazy stuff will be essential.

If you stick strictly to regular physics, it's very difficult to think of practical star travel methods at all. Perhaps the most powerful technology one can imagine under regular physics is fusion power: but fusion rockets applied to interstellar voyages are much like today's chemical rockets applied to orbital launch. They are so hard up against their practical limits that you have to use stages and throw most of your spacecraft away in order to reach your destination, even to get to nearby stars over multidecade time spans.

Obviously "Warp Ten" - generally thought to mean 10 times lightspeed - is still really a bit slow. At Warp Ten a ship would still take several months to reach nearby systems like Alpha Centauri or Barnard's Star, and years for anything further off.

*Though some scientifiction makes use of the fact that a starship crew going at close to lightspeed would personally experience a much shorter journey time than the decades or centuries that would pass in the universe outside the ship.