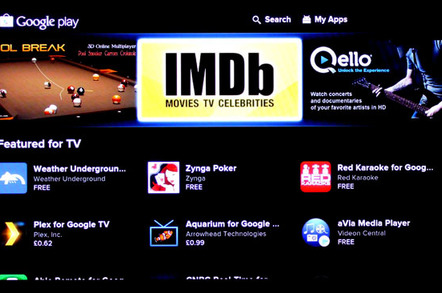 Analysis Freesat's redesigned user interface for its set-top boxes is a welcome improvement even if it is aping YouView. But the way in which we command and control our TVs will remain locked in the last century until everyone knows just what a modern telly set can do these days.

Using a television used to be very simple, back when TVs were very simple. These days watching TV is complicated, but until the additional functionality becomes routine we're going to be stuck with paradigms that don't work, and interface concepts stretched to breaking point, to assuage users who don't want to venture too far from their comfort zone, namely the electronic programme guide (EPG).

Freesat's new effort, for example, provides an EPG that rolls back as well as forwards for access to on-demand catch-up services. It also tries to suggest things one might want to watch, but won't record them automatically as that would risk infringing on TiVo's patent portfolio.

The basic functionality of a set-top box is pretty clear these days: record stuff in HD and SD, link episodes of a series, and access video-on-demand (VoD) services including BBC's iPlayer and Channel 4's 4OD. Any differentiation between products will involve additional nice-to-have features and usability.

Keeping a list of directors, actors and subjects of interest for automatic recording is also a TiVo-owned concept, but TiVo also pioneered a unique approach to interfacing that was a step too far for some, but can show us how things will eventually be.

The innovation was to assume the viewer will want to watch a recording, and that live TV is available from a menu but not considered something one would want to get involved in. To those who liked the approach it was obvious and intuitive, but there weren't enough of then in the UK - so TiVo's success was limited to the US until it was picked up but cable-provider Virgin Media.

More successful boxes, including Freesat's latest effort, work from the live EPG on the basis that most viewers can't be bothered to make a choice and just want to be entertained with the minimum of discretionary input. TiVo devotees may cringe at the insistence on showing live broadcasts while one is selecting a recording, but for most users it's a welcome comfort.

One can draw parallels with Microsoft Bob and the Windows 8 interface formerly known as Metro. Back in 1995 Bob took the desktop user interface paradigm to its logical conclusion, presenting an entire room with clickable calendar hanging on the wall, cheque book resting on the desk (for the financial app) and small dog who would ask you endless questions while you tried to work (and lived on as far as Windows 2000 in the form of a search agent).

Bob was designed for a world where no one knew what a word processor was, so to run it one had to click on a letter; no-one knew what email was so the user was required to tap on a bureau with trays marked "in" and "out". These days everyone knows what a web browser is, and what to expect when clicking on boxes labelled "music" or "weather", so the simple tiles in Windows 8 suffice.

It's telling that both <freetime> and Freeview+ describe a recorded TV series as "like a DVD box set" - in set-top boxes we're still at the Microsoft Bob stage of evolution, and while the technically inclined may prefer more uncluttered interfaces, it will be a few years before the majority are happy to give up the programmatically-organised grid of shows, and once they do one has to wonder what will come next.

VoD services such as LoveFilm or NetFlix present a bewildering array of choice, making a decision on what to watch on a whim almost impossible. The back catalogue in 4OD and other catch-up services go back a decade or two, but most users only want to go back a week.

Viewers still need to be reminded that they are in control and can make the decision on what to watch, rather than relying on a scheduler to tell them what they should be watching or should have seen. The big TV in the corner of the room isn't going anywhere, but we're only just beginning to work out how we're going to tell it what to show. ®