This news comes to us from Net Applications' monthly Net Market Share survey, which released its Desktop Operating System Market Share rankings on Monday. Caveat emptor: these statistics are based not by counting actual installation numbers – a prohibitively difficult task – but by extrapolating from internet usage as reported by 40,000 websites worldwide. Not a perfect methodology, to be sure, but one that provides a more than merely acceptable estimation.

Seeing as how it took Apple seven years worth of operating systems to edge past Microsoft's embarrassing flameout (released in January 2007), it doesn't appear that Redmond's desktop hegemony is due to come a-tumblin' down anytime soon. 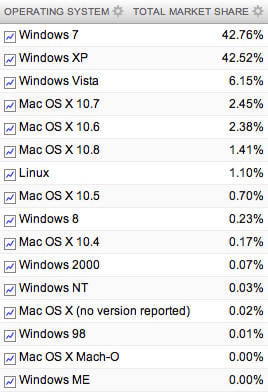 Which leads us to the next nugget in Monday's report – namely that Windows XP has been passed by Windows 7. The new leader, which was released in October 2009, barely snuck by Windows XP by posting a 42.76 per cent market share versus XP's 42.52 per cent.

Seeing as how Windows XP arrived on the scene over a decade ago, we have to tip our hat to that venerable operating system in honor of its long and useful – and, of course, continuing – lifespan.

For you Mac users who'd like a little bit of context, Windows XP's October 2001 release occurred mere months after the heinously buggy Mac OS X 10.0 Cheetah's debut in March of that year, an OS which Linus Torvalds famously described as "a piece of crap."

Mac OS X 10.0 was as big – or bigger – a jump from Apple's OS 9 as Windows 8 will be from Windows 7. It remains to be seen whether Microsoft's next operating system will have as long and productive life as the one Redmond gave birth to in 2001. ®