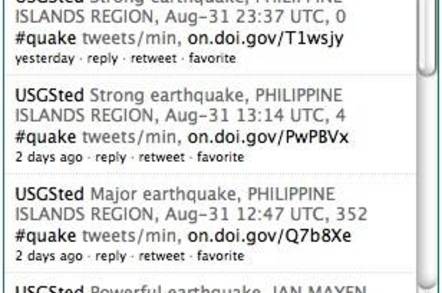 Twitter has beaten instruments to the punch at the US Geological Survey – but the geeks at the country’s lead earth-sciences agency are perfectly happy.

Launched last year to distribute earthquake information, the USGS has found its Tweet Earthquake Dispatch (TED) to be equally effective at receiving on-the-ground posts about quakes.

The agency has told Bloomberg that it began receiving Tweets from last Friday’s Philippines earthquake around one minute and seven seconds after the event – sooner than its instruments raised alerts, according to seismologist Paul Earle.

The quake resulted in a tsunami alert being issued. Happily that alert was cancelled as waves caused by the quake ended up being a mere 16 centimetres high. The 7.6 magnitude quake struck under the ocean 146 kilometres off Samar Island, resulting in one death and only minor damage.

TED monitors Twitter for “earthquake” posts in various languages, and in its own notices it provides a frequency counter of the number of Tweets originating from an earthquake region in "tweets per minute" – providing a hint at how widespread the effects of a quake may be felt.

The system can provide a “heads-up” that something’s happened before the wave is picked up by a seismograph (particularly if the quake happens somewhere remote from the USGS’s instruments), Earl told Bloomberg. ®