Microsoft on Tuesday launched a preview of Windows Azure Mobile Services, a new capability for Redmond's cloud platform that allows software developers to deploy backend services for mobile applications without any server-side coding.

"The reason we are introducing Windows Azure Mobile Services is because a lot of developers don't have the time/skillset/inclination to have to build a custom mobile backend themselves," writes Microsoft developer VP Scott Guthrie. "Instead they'd like to be able to leverage an existing solution to get started and then customize/extend further only as needed when their business grows."

The new services are automatically associated with SQL databases within Windows Azure, and remote apps can store and retrieve data from the databases using APIs provided by the Mobile Services backend.

The Mobile Services backend also supports sending push notifications to users, which can be triggered by small server-side scripts that execute in response to specific events.

As of Tuesday, every Windows Azure customer is allowed to create and deploy up to 10 Mobile Services and run them in a shared, multitenant hosting environment at no cost for the duration of the preview period, with an outbound traffic cap of 165MB/day. That includes customers who sign up for a 90-day free trial. 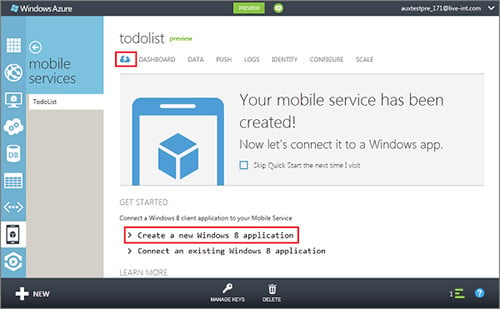 When traffic to these services reaches a point when they need more memory, bandwidth, or CPU, migrating them to their own, dedicated virtual machines is simply a matter of flipping a switch in the services dashboard – at which time the normal Windows Azure pricing scale kicks in, with compute capacity billed on a per-hour basis.

To build client-side apps that connect with Mobile Services, developers will need to install the Mobile Services SDK. The version that Microsoft made available on Tuesday only supports building apps based on the WinRT framework, which means apps for deployment via the Windows 8 Store.

The catch there, of course, is that it means developers will also need Visual Studio 2012, or at least the free Express version. But Guthrie says Redmond will make versions of the SDK available for other platforms soon, including not just Windows Phone and Windows 8 desktop apps, but also iOS, Android, and "others."

In addition, it plans to publish documentation for the Mobile Services APIs, which Guthrie says will allow developers to consume the APIs from any platform and integrate support into their own libraries and toolkits, if they choose.

For the initial preview period, Mobile Services will only be hosted in Microsoft's eastern US data center, which means customers in other regions might experience additional latency. Redmond is also not offering a service level agreement during the preview period. ®