Equipped with its mysterious research, Lego decided to do something to entice girls to buy its products. That something is Lego Friends, a pastel pink and purple world where mini-doll characters can indulge their vanity at the local beauty salon, cook and bake at the cafe or pet animals at the animal hospital.

Aside from its nods to every stereotype going about what it is that girls should be doing - cooking, playing house, caregiving, taking care of their looks so they can be sure to bag a man some day - the Friends sets seem to do their best to take actual construction out of girl's play. And that's caused a lot of worry for parents, who are well aware that Lego has been shown to have a whole host of benefits for kids, including helping spatial reasoning, fine motor skills and maths, not to mention encouraging independent play and accomplishment.

With Friends, the familiar green bases are there to build on, but instead of constructing the cafe, pet parlour or treehouse from bricks, whole walls and other big pieces are used to minimise the phase where the girl actually builds anything. 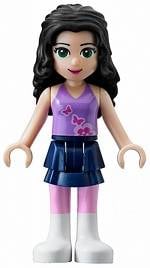 Then it's basically a straight-up doll set with different characters that are "mini-dolls" instead of the usual yellow-headed minifigs. The traditional minifig was basically genderless for a long time before the advent of Lego systems with more detailed stories like Lego Pirates, or from the movies like Lego Star Wars. In those systems, minifigs were given details like eyepatches, more expression and closer resemblance to the movie characters they're supposed to represent.

In Friends, that animation has been taken one step further. Instead of any kind of minifig, the set has dolls that are taller and look more like adult women, with curves and skirts.

Up until the early '80s, Lego was clearly marketed to both boys and girls. Ads in the early 1980s still show girls and boys building and playing together with the bricks, although most often with the general bucket of bricks concept instead of the systems.

Lego systems are the different lines of the toys that are seen nowadays, Lego Star Wars, Lego City, Ninjago or Lego Friends. Each set from a system fits into that world, although of course the bricks are compatible across the ranges.

Lego City is the modern incarnation of basic Lego, which started out with sets mirroring real life - houses, cars, aeroplanes - and then moved into the occasional fantasy set like castles with knights.