How I Learned to Stop Worrying and Love IPv6

You make my heart go Ping 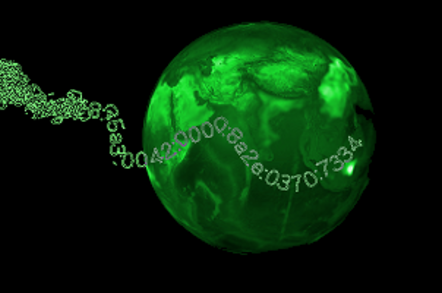 Stob IPv4 addresses are a rapidly dwindling commodity [...] ICANN distributed the last big chunks of available IPv4 addresses to the five continental Regional Internet Registries earlier this year. The RIRs in turn are running out of supplies to allocate to ISPs and other network operators - El Reg

Somewhere in the near future...

There were more than 50 people in the room, so it was hot and airless, and it smelled of stale sweat. Government-sponsored crisis posters, tatty and torn, were sticky-taped to the yellowish walls. One urged its readers: 'Don't let your selfishness come between little Johnny and his Wikipedia', another enquired: 'Do you NATter with your Neighbours? Don't squander the nation's resource!'

(The latter effort was illustrated with a carefully posed photo of a beaming, bosomy Minister for IT Conservation encouraging a weedy-looking Everybloke to plug his laptop into her generously exposed router socket. The photo had recently acquired a pleasing piquancy. This same Minister had been caught selling a bunch of government-owned IP addresses, supposedly earmarked for use in schools for the next generation of Olympic heroes, to the International Bank of Fatcat and Taxhavenia.)

Under the flickering fluorescent lighting, a shuffling, miserable queue of the desperate and the hopeless zigzagged towards the bullet- sound- and Windolene-proof glass of the counter. At the front of the queue was me.

The official behind the glass pursed his lips, flicked my carefully filled-in paperwork to one side with disdain, and leaned forward to speak into his goose-neck microphone...

'So, Ms Slob...' His tinnily-amplified voice retained the bored contempt of his expression.

'Ms Stob. Why exactly do you think you need a static IP address?'

'It's all there in the paperwork, sir. I am publishing a book...'

'Really? You are publishing a book, eh? I think you'll find that Amazon already has a website for that.'

This quip drew some appreciative chuckles from the front of the queue. Their turn would come soon, but meanwhile they could enjoy the humiliation of another.

'I am self-publishing a book, with special online facilities. It's for programmers.'

'It is written to help HMI designers accommodate the needs of the disabled. It's all about maximising the User Experience for those unfortunate enough to suffer from colour blindness.' I maxed out the 'sincere concern' timbres of my voice, trying to sound like Esther Rantzen on The Week's Good Cause.

'Is that so? I'm surprised you think that there would be a significant market for that sort of thing. What is the book to be called?'

The man pressed a button on his desk, and a buzzer sounded. 'Frivolity, fraud and an attempt to mis-exploit the public lust. You're lucky I don't have you arrested. Application emphatically rejected. Next supplicant.'

I pulled my papers back through the slot in the glass and stumbled, red-faced, past the jeers of the attendant watchers and towards the exit.

As I neared the door, an elderly, scruffy man accosted me. He was wearing a filthy North Face jacket and a Mockney accent strong enough at three yards to remind one of the existence of Ben Elton.

''Ere, love, wanna buy an Eye Pee? Only a bag of sand a pop.' He dropped his voice to a hoarse whisper. 'Ow about 10.110.104.65? All perfickly kosher. Bags of provenance. Young lady woke up this morning, suddenly decided she 'ad no use for it, nah mean? You could walk away wiv that right now, get your dirty website on the air before dinnah time.'

I smiled calmly, said nothing and walked on, faster. These days everybody in the IT game can spot a private IP address at 50 feet. You have to. This kiss-artist probably hoped I was an amateur who would get out my phone and try to validate his merchandise. Not that he was interested in my actual mobile. An accomplice would appear and IP-jack me.

I still had an hour and 37 minutes left on my DHCP lease. People had died for less. Besides, I had a Plan B to execute.

It was 72 minutes later, and I was sitting in the park, on the third bench from the end. A tall man in a pinstripe appeared and sat down beside me.

He said: 'I have heard that the 1 bits in a good subnet mask are all contiguous.'

I replied: 'It is truly spoken that the conceptual layers in the TCP/IP network model are not rigid but blended, like a sherry trifle that has been for too long a car ride.'

'When IPsec is implemented in transport mode, the IP addresses in the packet must not be translated.'

'Ms Stob, glad to meet you, you debate well. But enough playful banter and chitchat. I understand you are interested in some of my merchandise.'

'You understand correctly, Mr Phillips. But first I will need to verify the quality.'

'Of course. And I think you will find the quality does not disappoint. Look.' He was carrying an old-fashioned paper newspaper. He showed me the corner of it, on which was pencilled: 17.n.n.n.

I turned to him in astonishment. 'What? You claim to have access the Class A subnet of Apple? The legendary IP address block of 16,777,216 addresses that they are keeping hold of for Steve's Infeasible Third Coming? How is this possible?'

'I told you I had a quality proposition. See here.' He produced a tablet computer and, as I leaned forward to look at it, I thought I heard something behind me. Then everything went black.

When I woke up, I knew I was in bad trouble even before I opened my eyes. The back of my head was sore, and I couldn't move my hands or feet.

'You can stop pretending now, Ms Stob. I know you are awake.' It was Mr Phillips's voice.

Then I did open my eyes. I was lying on my back on some sort of hospital trolley, with my legs and arms tied down. The room was dark, but there was a bright light shining directly in my face, very nearly as bright as its 60W incandescent equivalent, although of inferior colour for domestic use.

Next page: What are you injecting into me?
Page:
Tips and corrections
79 Comments