The building that piped footage of Usain Bolt's double gold to the world will be turned into a data centre with a 55MW power capacity.

The iCity bid beat two other proposals to become a "long-term tenant" at the £295m venue in Stratford, east London. One rival bid offered to turn the building into a leisure facility called "Oxylane Village" and the other suggested turning it into a "fashion centre".

The London Legacy Development Corporation (LLDC) said, however, that the iCity bid fitted its vision to "build upon the existing success of east London’s flourishing digital and creative industries". LLDC is probably referring to the web startup-playground Tech City, which lies nearby around Shoreditch's so-called Silicon Roundabout.

iCity will put £350m into refurbishing a 260,000 sq ft area in the broadcast HQ to create the data centre, taking up just under half of the 670,000 sq ft floor space available inside the huge building. It will also convert the press building next door, which has space for 20,000 desks, into offices.

El Reg asked Delancy and Infinity exactly how much they paid, or will be paying, to use the public-private-funded facility, but we were told that figure is still under negotiation. The iCity project is the "preferred bid" for the space, but must meet certain criteria before it gets the full go-ahead.

If all does go to plan, the office space in iCity will become available from late 2013 and the data centre will be operational by summer 2014.

The hefty infrastructure already in place at the site is ripe for development, said Gavin Poole, CEO of iCity.

"London 2012 has been the most broadcast event in living history and has been achieved through the vast telecom infrastructure built into the broadcast centre," he told The Reg.

"These buildings were purposely built for 20,000 journalists to broadcast uninterrupted pictures of the Games all around the world, which they have done with no outages whatsoever due to this advanced telecommunications infrastructure and bandwidth connectivity. 75 per cent of the UK’s internet peering points, 15 of 18, are just two miles away in Docklands."

According to the iCity plan 4,600 people will be directly employed on the site in new jobs, and bosses predict that a further 2,000 jobs will be created in the supply chain and by workers spending their wages in nearby shops and such like. 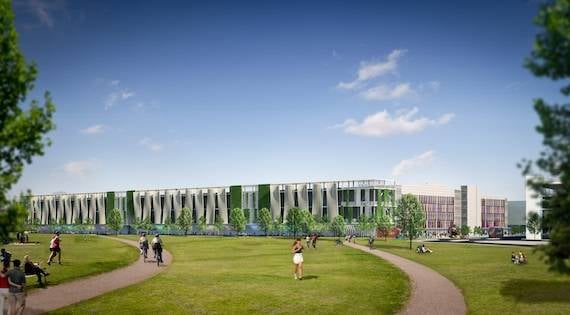 The server warehouse at the heart of the development will have a power capacity of 28MW, tapped from the local grid. In order to cater for other systems, such as cooling equipment for the damn thing, the total capacity at the site when it opens will be more like 40MW. Spencer Lamb, a partner at Infinity, said the centre should only take that sort of load for two to three weeks a year.

The serious amount of air-con on the windowless broadcast HQ should be helpful for the racks of servers that will replace the TV studios inside.

The sheer amount of infrastructure installed at the London 2012 site means that iCity could scale up its operations if there is demand for it. Lamb said the centre could expand its power capacity for the servers to 55MW, which will actually push the site's capacity to 90MW to cope with the cooling required.

That's a lot. A new US government data centre has reserved 60MW for IT power.

The types of servers packed into the iCity building will depend on the companies using the space inside, Lamb said. Following the standard data centre model, Infinity will provide the mechanics and electricity, and its customers will portion up space and servers for businesses, universities and other organisations to use.

Cheap office space, half-decent transport links, access to the biggest data centre in London and 60Gbps connectivity at the core is expected to lure startups, multinationals and TV and video companies. Ultimately, iCity hopes to lure Shoreditch hipsters to its East London lair, cooled and shiny it may be. 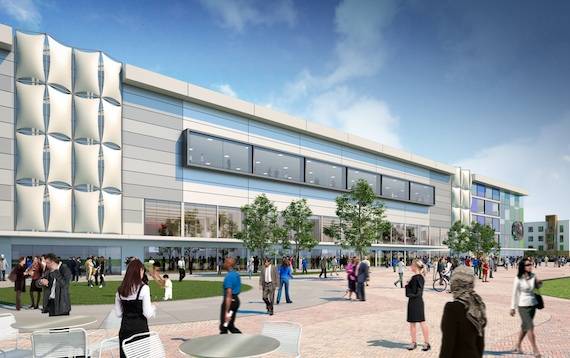 The plan to fill the park with techno creatives will bring to fruition David Cameron's dream to spread Tech City into the Lea Valley. ®