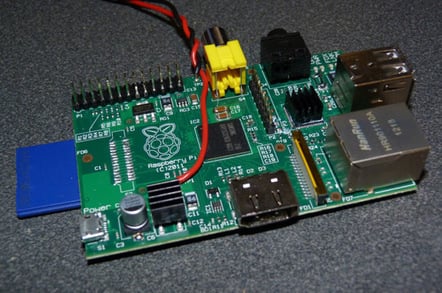 The little computer that can, the Raspberry Pi, has successfully run the imminent Firefox OS, thanks to the efforts of a Nokia employee named Oleg Romashin.

Firefox OS, also and/or formerly known as Boot to Gecko (B2G), is the Mozilla foundation’s attempt at providing an HTML-5 powered OS that will free punters from the tyranny of apps tied to mobile operating systems. The foundation sees the project as not entirely dissimilar to Google’s Chrome OS efforts, but doesn’t feel it is in competition with the text ad giant as it intends Firefox OS as a phone-only play rather than a Microsoft-on-the-lap irritant.

The OS is a long way from reaching production: milestone tracking for a development release slated for release on July 20th shows (Google Doc) lots of development chores remain unstarted.

But that didn’t stop Romashin from hacking together a version of the OS that can run on the Pi. Just what it’s useful for is anyone’s guess, but there is video of an animated rotating teapot which we imagine will excite some.

The Pi guys are nonetheless excited about the port, noting it here, while tarballs of the whole sticky mess can be had here for those of you who want to whip up your own Firefox OS Pi.

Romashin seems to have undertaken this work off his own bat. So let’s stick to lame puns on “pie”, shall we, rather than wondering what Redmond will say about Nokia playing with an OS other than Windows Phone. ®