OpenStack freakage when enough of you ask

HotLink, the startup server virtualization management tool maker that came out of stealth mode a year ago, is reaching out from private clouds into public clouds with a new product called HotLink Hybrid Express.

The idea is to create a new kind of tool, which HotLink calls a SuperVisor, that acts as an uber control freak that spans the management consoles used by different server virtualization hypervisors, masking the stand-outs between the hypervisors and the consoles and letting them manage any of them from the console of their choice – not just the one that the hypervisor supplier wants you to use. That way, you get to avoid a situation like this: 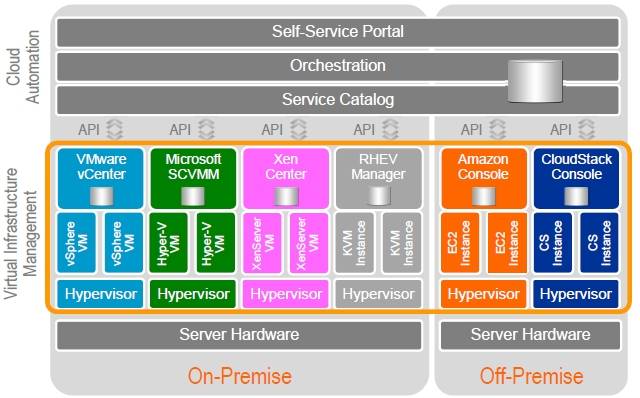 The hodge-podge of hypervisors and consoles that IT wrestles with

HotLink was set up in 2010 by Lynn LeBlanc and Richard Offer, the founders at FastScale Technology, which EMC acquired in August 2009 and transferred to its VMware virtualization subsidiary the following February. LeBlanc and Offer have come up with a different twist on virtualization from what they cooked up with FastScale.

The big problem is not just wrestling with multiple consoles, but that no matter what self-service portal, orchestration, or service catalog you want to buy or create, the APIs coming out of these tools are limited and don't overlap well with all virtualization management consoles.

If you want the full functionality of each hypervisor, then you need to use its console. With SuperVisor, HotLink is basically lying to the hypervisors and telling them exactly what they want to hear: that they are talking to their own management consoles, even if they are not.

The SuperVisor software can also transform a virtual machine from one hypervisor and format to another as it is live migrated around the server cluster, which is a very handy feature.

For the moment, SuperVisor assumes that want to use VMware's vCenter management console, and the transformation engine at the heart of the SuperVisor tool allows for vCenter to take control of VMware's ESXi hypervisor, but also has agents that allow it to freak on XenServer, Hyper-V, and KVM hypervisors and the virtual machines that run atop them.

HotLink is working on variants of HyperVisor that would allow Systems Center from Microsoft, XenCenter from Citrix Systems, or Enterprise Virtualization Manager from Red Hat to be the virtualization management console of choice spanning all hypervisors, but this work has not been completed yet. For enterprises today, vCenter is by far the most familiar virtualization console in use in production.

SuperVisor is not open source and it is certainly not free. When SuperVisor was launched last year, a license that allows vCenter to control five physical hosts running the ESXi hypervisor costs $20,000, and then you pay a $20,000 fee for each hypervisor you want to support beyond ESXi and then $1,800 per physical server beyond that.

With the other consoles not yet supported with SuperVisor, HotLink has turned its attention to the clouds with an add-on product called HotLink Hybrid Express. This tool takes the HotLink server and transformation engine and links it up to Amazon's EC2 compute cloud or any public cloud based on the CloudStack cloud controller from Citrix Systems. And so now you can use vCenter plus SuperVisor to manage virtual machine instances out on the cloud, like so: 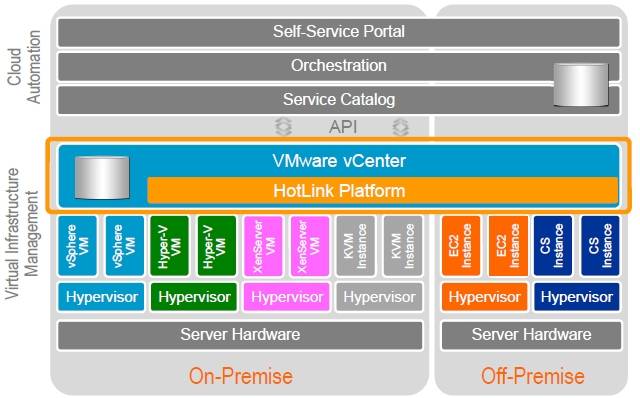 Reining in hypervisors and clouds with SuperVisor and Hybrid Express

Hybrid Express treats the virtual machines and their underlying hypervisors and cloud fabrics just as it would an ESXi hypervisor, says Jerry McLeod, vice president of marketing and business development at HotLink.

"You know nothing about how EC2 works, and you just don't care," McLeod quips. "Amazon EC2 or a CloudStack public cloud are just another hypervisor as far as we are concerned."

The HotLink Hybrid Express tool can be used in standalone mode if you use ESXi and vCenter on your internal servers and want to control virty infrastructure out there on EC2 or CloudStack clouds. You can also mash it up with SuperVisor if you have a multi-hypervisor environment internally.

While HotLink is hearing more and more about OpenStack clouds from customers, no customer has asked to be able to link out to an OpenStack public cloud, yet. But with Red Hat, Rackspace Hosting, Piston Computing and others rolling out OpenStack distros and Hewlett-Packard, Dell, and Rackspace offering OpenStack-based public clouds, it won't be long before customers will ask.

It probably won't be long before Microsoft, Citrix, or VMware try to buy HotLink, either – if they haven't tried a few times already. If the past resembles the future, then HotLink will hold out for a few years, build up its tools and customer base and swell the value of its company and then cash in. ®