Locking in the NBN

Beneath the covers, the network is getting closer to irreversible 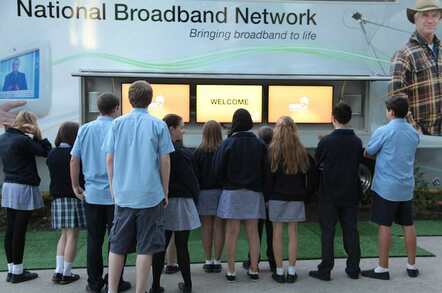 Supporters of Australia's government-backed National Broadband Network are fearful of what will happen if there’s a change of government in 2013, since the current federal opposition remains strongly committed to doing something else with the NBN.

Exactly what the “something else” might be remains something we can only see through a glass, darkly, since the opposition spends more words criticizing any and every aspect of the NBN than giving the fine detail of its own plans.

The new NBN Co corporate plan, which detailed a capex increase of $1.4 billion and a six-month slip in the build timeline, provided a handy stick with which to beat the NBN, but didn’t extract any extra detail from the opposition beyond its already-known preference for fibre-to-the-node.

The battle isn’t, however, about technology, but politics – and even if the current government finds itself riding the ejector seat in 2013, there’s reason to hope that some of its NBN legacy will survive intact.

One reason for hope came with Telstra’s financial results announcement yesterday. The carrier clearly believes that it’s now joined at the hip with the NBN, and not only because it is to receive $11 billion (pre-tax net present value, which means the actual cash changing hands will be more than that) for its customer hand-off to the NBN.

Telstra also committed itself to a faster implementation of the transit network build that will support the NBN. The transit network will help carry traffic from NBN Co’s 121 points of presence back to retailers’ data centres (mostly in cities).

That investment is only a relatively small part of the capex plans Telstra announced yesterday – it’s putting $AU500 million into the transit network, which will also support its LTE build, compared to $AU1.2 billion on LTE network expansion.

The build suggests that Telstra believes NBN transit is a business worth having – a view reflected by owners of other national fibre networks like Nextgen, AAPT and Optus, all of whom have announced wholesale-level NBN aggregation services. None of them will want a solid future business destroyed purely to satisfy the ideology of a new government.

The other piece of the political jigsaw falling into place this week was the opening of Prysmian’s fibre construction facility in Sydney. In the scheme of the economy as a whole, it’s relatively minor: $AU11 million or $AU13 million depending on the report, 50 new jobs, supporting a $AU300 million contract.

Its political value stretches far beyond that, however. The NBN will ultimately need a couple of hundred thousand kilometers of fibre; Prysmian isn’t manufacturing all of it, but its factory acts as a symbol of the upside of the spend – local jobs, local manufacture, high-skill work, and all the rest.

With too-radical a restructure of the NBN, the opposition would find itself under fire for shutting down not just the network, but the businesses that are now scrambling to supply it.

Senator Conroy said, earlier this year, that about one-third of the NBN was “proof” against opposition interference. A completed Telstra transit network and a few more high-profile manufacturing deals would extend that defensive position further.

Bootnote: El Reg has avoided the word “blowout” to describe the cost or construction timing announced in the NBN Co corporate plan. Both are within five percent of the original forecasts, which makes the error trivial. ®